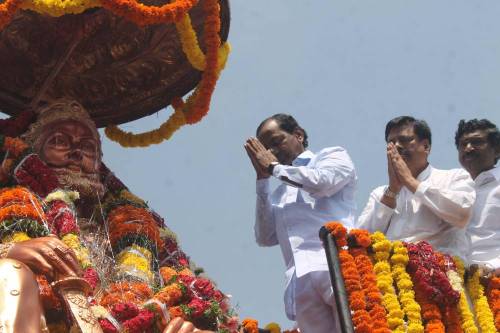 The Telangana government has released Rs.46.2 crore towards financial assistance for families of those who laid down their lives for separate Telangana state.

Chief Minister K. Chandrasekhar Rao  signed the orders for payment of Rs.10 lakh each to the families of the martyrs. According to an official statement, the money will be paid to the families in their respective districts with full honours.

Rao assured that financial help would also be extended to the families of remaining martyrs after receipt of the reports from district collectors.

Telangana Rashtra Samithi (TRS), in its election manifesto, had promised the help to the next of the kin of those who laid down their lives for creation of the separate state since 1969. Majority of those identified for assistance are the ones who committed suicide during last few years.

Telangana came into existence as India’s 29th state on June 2 this year. The same day, the TRS formed the first government.

The state cabinet in July decided to fulfil the poll promise to help the families of the martyrs.

It had also decided to give job to one eligible family member, bear medical expenses of all family members and ensure free education to their children. The government had also stated that if the families are landless agriculturists, they will each be given three acres of land.