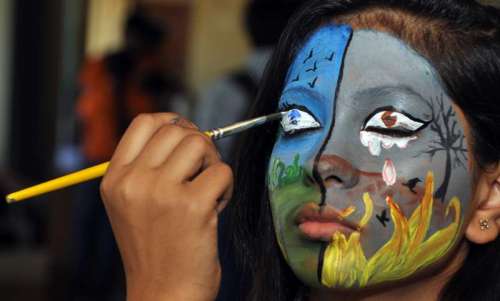 I’m starting a group called The Anti-Social Society, with meetings at a restaurant every Friday. If you turn up, you’re disqualified.

These days it’s too much trouble to go out, anyway. A reader sent me a report about a man who filed a police report against a restaurant which served him a meal which was too spicy.

His tongue was still aflame from the plate of nasi goreng he’d eaten at 9 p.m. the previous night. “I can still taste the spiciness from the rice I had yesterday,” the man, a Singaporean visiting Johor Bahru in Malaysia, wrote in the police statement. His next stop was hospital.

The news item forwarded from the Rakyat Post says top cop Abdul Samad Salleh confirmed that such a complaint had been filed, but declined to say whether a police tactical unit would raid the kitchens. “Put your hands up and step away from the chilli sauce.”

Now if you’ll excuse me risking being sexist for a moment, most women reading this are probably thinking that it would be wise to avoid that restaurant, while most guys are thinking: Food so spicy it requires hospitalization! Cool! I need to get me down to Johor Bahru fast!

You see men like lethal foods. My wife says this is because men are driven by machismo, which is Latin for “stupidity”. I prefer to think that evolution primed us to tackle danger in all shapes and forms. “Over-spiced nasi goreng? Stand back. I’ll deal with this.”

The good news is that the business community stands ready to help. The Ancheng Insurance Company of China has launched a cash-back policy which specifically covers cases in which diners burn their mouths eating hotpot, a fashionable dish which is often both spicy-hot and heat-hot.

The Universe clearly wants me to write about lethal foods, because the very next item sent in by a reader (thank you, Wendy Tong), was about Corey McQueary, 33, recently found dead in a cell in the US state of Kentucky, after eating the underpants of a fellow inmate. The underpants had been soaked in the liquid form of an expensive drug. I dearly love my friends, readers and colleagues, but I don’t think I would eat their underpants even if they were soaked in Chateau Lynch-Bages 1961. I apologize if any of you feels insulted by that.

On the subject of marinated foods, a reader from India sent me a curious report suggesting that a man-eating leopard in the Kumaon hills, near the Himalayas, has developed a taste for homo sapiens soaked in alcohol. Over the past two-and-a-half years, it has killed more than a dozen unfortunate people, showing a strong preference for drunk males staggering home after a night out.

A friend who knows about these things tells me that alcohol adds piquancy to foodstuff, but animals hate chilli sauce. The obvious answer is to airlift a large portion of nasi goreng from Malaysia to India.

Anyway, if you do turn up at the first meeting of The Anti-Social Society next Friday, don’t look for me. I’ll probably be sitting by myself at a restaurant in Johor Bahru, demonstrating my machismo.