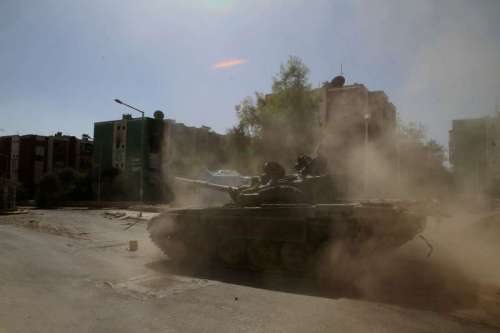 US Joint Chief of Staff Gen. Martin Dempsey has said that it is possible that the Syrian city of Kobani, bordering Turkey, could be seized by the Islamic State (IS) terrorist group in the next few days.

“I am fearful that Kobani will fall,” said Dempsey in an interview with ABC television aired Tuesday about the offensive that the US-led international coalition is carrying out against the Sunni extremists.

Dempsey said that the IS fighters have been exerting pressure both outside and inside the city, and that Kobani “may be on the verge of falling”.

Kobani, one of three key Kurdish cities in Syria, has been an IS target since Sep 16, forcing thousands of people to flee to Turkey.

On Tuesday, Dempsey telephoned his Turkish counterpart Necdet Ozel, who assured him that Ankara has deployed troops on its side of the border to prevent any possible IS attempt to cross into Turkey.

“But they are smart enough not to do that,” said Dempsey about the jihadis.

Warplanes of the multinational force have bombed jihadi concentrations to the south and southwest of Kobani, as well as to the east.

Although Kurdish irregulars are putting up a stiff resistance at all access points into the city, they have less sophisticated weapons than the radicals who are armed with heavy weapons and combat vehicles.

The UN special envoy to Syria, Staffan de Mistura, Tuesday urged the international community to prevent the collapse of the Kurdish city, while Turkish President Recep Tayyip Erdogan said this would require a ground offensive, something that Damascus strongly opposes.