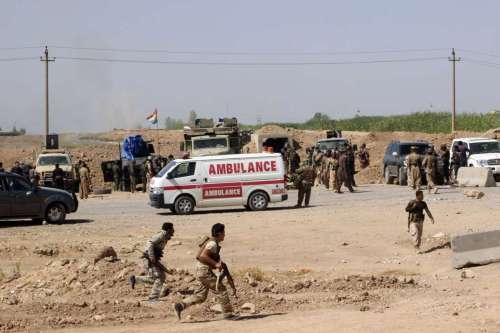 At least 35 fighters of the Islamic State (IS) Sunni radical group were killed  by the strikes of the US-led anti-terror coalition in northern Syria, media reports said.

The strikes, carried out by US drones along with Jordanian war jets, targeted the IS positions in the countryside of the northern province of Hasaka and the vicinity of the predominantly Kurdish city of Kobane in the northwestern province of Aleppo, bordering Turkey, Xinhua quoted the pan-Arab al-Mayadeen TV as saying in a report.

The Kurdish People’s Protection Unites, or the YPG, said in a statement Friday that its fighters killed 67 IS militants and were able to stop the group’s advancement toward Kobane.

Kobane, also known as Ayn al-Arab, has been subject to ferocious attacks by the IS militants over the past two weeks. The terror group’s fighters succeeded to capture hundreds of Kurdish villages around Kobane, sending tens of thousands of people fleeing for their lives toward the Turkish borders.

Citing sources inside Kobane, al-Mayadeen said the city was still subject to shelling from the IS militants.

Kurdish activists accused Turkey of cooperating with the IS to empty the city of its residents so that it could impose a buffer zone on the Syrian side of the borders under the pretext of helping the refugees.

The US-led anti-terror coalition has repeatedly struck the positions of the IS around Kobani. However, the US strikes did not stop the ferocious attacks by the IS.

Syrian Kurds, whose communities largely live in the northern parts of Syria, have reached a deadlock in their fight with the IS militants, who have repeatedly tried to storm Kurdish-dominated Syrian areas.

Syria’s Kurds account for some 15 percent of the country’s 23 million inhabitants, most living in the northern part of the embattled country.