India should deploy counter-constraint policies against Pakistan since historic reconciliation is not a “credible possibility”, eminent diplomat Shyam Saran, former foreign secretary and chairman of the National Security Advisory Board, has said.
In an indirect reference to Pakistan’s overtures to separatist leaders, which led to cancellation of foreign secretary-level talks with the country last month, Saran said Pakistan was using asymmetrical strategies to impose “significant constraints” on India, which made retaliation a necessity. 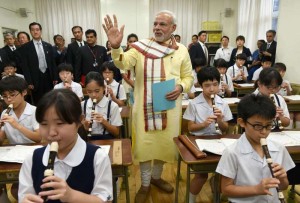 “India will have to settle for managing an adversarial relationship with its neighbour the best it can. This will have to include elements of constraintment, which in plain terms means the ability to inflict pain if India’s security is threatened,” Saran said, adding that attempts at enhancing bilateral trade and people-to-people contact should also go on simultaneously.

He said that Pakistan may use its Taliban proxies to establish a dominant presence in Afghanistan and hence it was imperative for India to strengthen the Afghan National Army and other security forces through training and supply of hardware.

He said any talk of the Line of Control in Jammu and Kashmir as the international border at the very beginning of a negotiation with Pakistan would be bad diplomacy.

“If the LoC is to become the eventual international boundary between the two countries then it should be the end point of negotiations not the starting point,” Saran said at a packed Gulmohur Hall at the inaugural lecture of the Changing Asia series titled “Changing geopolitical challenges and India’s foreign policy” organised by the Society for Policy Studies in collaboration with India Habitat Centre here Monday evening.

Arguing that the role of US to limit China’s geo-political aspirations has become “less credible”, Saran seconded India’s foreign policy proposition “Act East, beyond just Look East,” in which an enhanced India-Japan partnership is envisaged.

Saran said: “In the US-China-Russia triangle it is China that has emerged as the pivot. Which means that the US pivot to limit China’s strategic expansion has become even less credible than it has already been. For India these developments have serious implications.”

He pointed out that an increased US-Russia tension will mean that India cannot inch closer to these two countries without these being “mutually limiting”.

“The consolidation of an India-Japan partnership will help the second and the third largest powers in Asia to shape the emerging security and economic architecture of this part of Asia,” Saran added, while also including Australia and South Korea into the definition of what is “East” for India.

Saran dubbed the emergence of ISIL (Islamic State of Iraq and the Levant) as “self-financed terrorism” and said India must look for alternative energy suppliers other than the WANA (West Asian and North African) countries which may come under the influence of an Islamic caliphate.

“Another foreign policy objective must be to diversify our sources of energy supplies away from WANA towards Africa, Latin America, Russia and South East Asia,” Saran said, ruling out any major spillover of violent sectarianism unleashed by ISIL into the Muslim population of India.

“The inclusiveness and vision of a plural society that lies at the heart of our constitution is a powerful antidote to the virus of extremism,” Saran said.