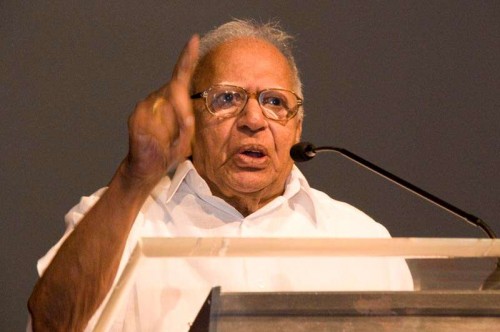 Fine lawyer, eminent jurist, incredible philosopher & above all a phenomenal human being. I bow to Justice Krishna Iyer.

Modi said, “My association with Justice Krishna Iyer was special. My mind goes back to our conversations & the insightful letters he would write to me. Whenever I would meet or talk to him, I would find him full of enthusiasm, always talking about the well-being of India. A remarkable man”. May Justice Krishna Iyer’s soul attain eternal peace. My thoughts are with his family during this moment of immense sadness.

Iyer was in the hospital since last Friday for treatment of pneumonia and his condition deteriorated in the past few days.

He was the minister of law in the first Communist government led by legendary E.M.S. Nampoothiripad in 1957.

He was also the member of the second Kerala legislative assembly.

Iyer became a judge of the Kerala High Court in 1968 and remained there till 1971.

He was also the member of the Law Commission for two years.