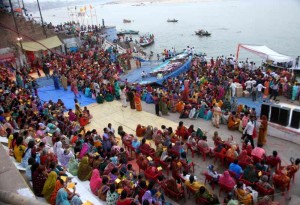 You would be forgiven if you thought that Varanasi, one of the oldest cities known to man, which is now Indian Prime Minister Narendra Modi’s parliamentary constituency, would be a sight for sore eyes. Sadly for me, what lies in “the city of Shiva” only managed to make the soreness worse.

It was one of the dirtiest and under-developed places I have ever visited. Landing in this Hindu holy city will surely come as a culture shock to those who come with the aim of washing away their sins. I don’t know what they will wash away but they surely will carry some dirt back to where they came from.

Varanasi or Benaras in Uttar Pradesh is regarded as the most sacred of Hinduism’s seven holiest cities. It is equally important for the Jains and the Buddhists; a storehouse of ancient history, culture and traditions.

It is said that Varanasi was Lord Shiva’s favourite place. The Ganga river that flows through the city is an essential part of all religious rituals, including cremations. Hindus believe that dying in Varanasi is the way to salvation.

“Benares is older than history, older than tradition, older even than legend and looks twice as old as all of them put together,” Mark Twain had said.

“Twice as old”, would be an understatement because the crumbling city desperately needs a modern makeover. It’s crying out for Prime Minister Modi’s Swachh Bharat Abhiyan for a cleaner India that he launched on October 2, Mahatma Gandhi’s birth anniversary. It’s all very well to talk about a clean India by 2019, but charity begins at home.

There are no traffic signals. Garbage is strewn everywhere and no maintenance of old buildings. A tourist hub for both nationals and foreigners, it is also quite scary once the sun sets.

One of the main attractions of the city, the Ghats, are actually quite filthy. There isn’t even one dustbin and so instead of gazing at something soothing, all you can see are candy and chips wrappers, plastic bottles and filth of all kind.

But, amidst this upsetting gloom and dirt lies nearby Sarnath, sacred to Buddhists the world over. It is here that Lord Buddha delivered his first sermon after attaining enlightenment and also taught the four noble truths.

The ruins are maintained quite well and no littering anywhere. Once in Sarnath, I felt like I was in a completely different city altogether.

Many in Varanasi harken to a bygone era. When I had asked a shopkeeper in a handloom store about preserving the old buildings in the city, his reply was: “Do you paint the Qutab Minar to make it look new and fresh? Then why should we touch something which is rich with ancient history?”

The government is now readying a Rs. 11,800 crore ($2 billion) redevelopment plan for Varanasi whose tentative launch is set for Dec 25, the birth anniversary of former prime minister Atal Bihari Vajpayee.