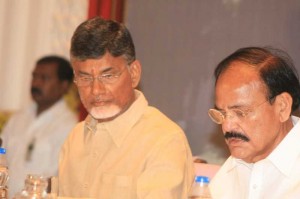 Finally ending the suspense, Andhra Pradesh Chief Minister N. Chandrababu Naidu Thursday announced that Vijayawada will be the capital of the state.

He told the state legislative assembly Thursday that the government has decided to “locate the capital city in a central place of the state around Vijayawada”.

Naidu said the decision was taken in the state cabinet meeting Sep 1.

“It was also decided to go for decentralized development of the state with three mega cities and 14 smart cities,” he said amid protests by opposition YSR Congress Party for making the announcement without consultations.

Naidu said the cabinet also decided to go for land pooling system for building the new capital. The system will be worked out by a cabinet sub-committee.

In a 20-page statement read out before the scheduled time, the chief minister defended the choice saying Vijayawada is centrally located and accessible to all districts of the state.

He announced the measures his government proposed to take for development of all three regions of the state.

The chief minister said the Telugu Desam Party (TDP) government was committed to all round development of all 13 districts of the state.

Located on the banks of Krishna river in Krishna district of south coastal Andhra, Vijayawada is about 300 km from Hyderabad, which is currently serving as the common capital of both Telangana and Andhra Pradesh.

Under Andhra Pradesh Reorganisation Act, Hyderabad will be common capital of the two states for a period not more than 10 years.

With a population of over a million as per 2011 census, Vijayawada is a major commercial hub.

An expert committee constituted by the central government to identify the capital submitted its report last week, suggesting various options. It, however, left the final decision to the government.