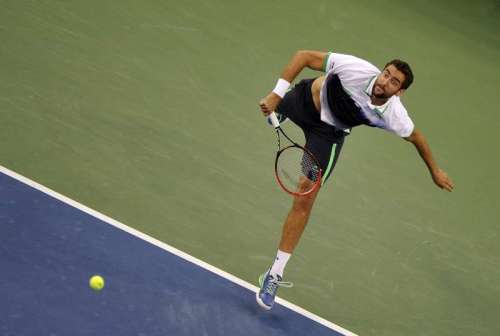 I once saw Andre Agassi play at Roland Garros (pronounced ‘orran gawo’, you uneducated slob) and after he had won the match he took off his shirt and flung it into the stands, thereby starting a mini-riot as a slew of lovely French ladies fought stalwartly to retrieve the trophy.

Much imbued by this display of post match male prowess I did quite the same thing at the Squash league at the though not with the same results. Having won the fifth decider by virtue of my opponent hitting the tin I took off my T-shirt and flung it up at the gallery, gently striking this lady who was standing there. Her husband was on the premises and before I knew it there was this almighty row and he was going on about who did this and thought I was flinging sweaty clothes at his wife and I said, you don’t understand, it is the sporty thing to do, Andre did it, now fedex and Joker do it. And he said, I am going to call the Manager and he did and the manager said, we can’t have our members darting about flinging clothes at people, this is a fine club, an exclusive club, a club with a certain code of conduct.

Not to mention indecent exposure, said the husband in between consoling his wife who was now saying the sleeve of the shirt had whipped her eye and was it red, darling, and should we see a doctor.

At which point a friend walked by and said, heard you have been throwing clothes at people, what’s gone wrong with you?

It was a gesture of triumph, I said, like Caesar after he dumped Pompei, you know, the victor’s gesture, the big flag wave.

Caesar never went about chucking his clothes at folks, he said, and come to think of it, he would have looked pretty silly throwing chunks of armour, why didn’t you just raise your hands in the air, you know, I don’t understand you.

Anyway I slunk out of the club after the manager had placed my membership under a cloud with a caution that the matter would be referred to the committee and the other members sort of shrunk away in the men’s room though one did say, lost your shirt I believe, followed by much laughter.

The story beat me home so when I went in and said, hi, I won, there was this frosty glacial feel in the room.

My wife sniffed. Now, when my wife sniffs there is something wrong. Very wrong. So I said, what is wrong.

She said, nothing, why should anything be wrong, so what if my husband earns a reputation for throwing dirty clothes at strange women and the whole town knows about it, that’s no big deal, what difference does it make if we are the laughing stock of the place, I mean everyone’s husband throws soiled clothes at spectators…

They were not soiled clothes, I shouted, they were trophies, the sort of a thing the victor does after his triumph.

She said, you are not Alexander the Great you know, this is just a game, you do not go about  throwing clothes in people’s faces.

It has now been some weeks since this episode and I am still waiting for the committee to convene. Meanwhile, the lawyers have written me a letter asking me to explain the aggravated assault I perpetuated on their client, thereby causing shock, trauma and grievous personal injury.

My lawyer recommends I seek sanctuary in temporary insanity brought upon by the excitement of my first victory in 15 matches.

That’s not true, I say, I also won a game last season.

Yes, he says, but did you hit a lady in her face with a soiled shirt…

It’s not a soiled shirt, I shout, it is the spoils of war.

But no one’s listening.