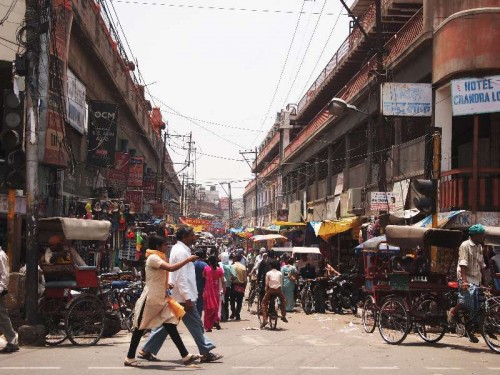 The “conversion” to Hinduism of some people of a settlement on the outskirts of this city has triggered a debate in parliament, but the residents say they haven’t converted and wonder what the hullaballo is all about.

About 55 odd families are now a worried lot after their “conversion and home-coming” ceremony organised by the Bajrang Dal in Kabadi basti in Ved Nagar.

Sumi, a trash collector, wondered what was going on as she stuffed a bag with polythene.

She said she didn’t know nor did she care what was going on around her as she picked up trash. “So many people coming here and going.”

Another resident, Mumtaz Begam, asserted no one has converted.

“A havan kund was made and we were standing and watching the proceedings. It’s all a sham,” she said.

The conversion story now seems to have taken a u-turn. Those who spoke before TV cameras Monday of having converted, developed cold feet and backtracked, saying they were Muslims and had been duped on lure of facilities and cards.

District Magistrate Pankaj Kumarsaid: “The whole case is being investigated by the police.”

A Hindu Jagran Manch leader, not wishing to be named, said: “All these people had approached us and had filled forms before the rituals were conducted. They are all grown-ups and know what they are doing. Obviously, they have been pressurised or threatened by some groups.”

Agra police too are now on alert. The Local Intelligence Unit has been activated and police pickets posted in the area.

Officials reached Ved Nagar and recorded statements of those who were identified as converted by the Hindutva groups.

Sharifa, an elderly woman, said some 50-odd people came to the settlement Sunday. “They said you just get photographed and you will get some cards and a plot.”

Another resident, Mohammed Amir Ali told IANS: “We don’t know what’s going on. We have no information.”

Yet another trash collector, Mohammad Habib said: “We were told some notice has come from government and we will all be evicted from here. You get photographed with the puja ceremony and we will protect your interests.”

Most of them are now worried about their livelihood.

Afzal said: “We are neither here nor there. we have been used for politics.”

Added Jubenishan Begum: “We are caught in a mess. We were happy collecting trash. For three days our work is suspended.”

Many have already left the settlement.

The state government has called for reports and directed the authorities to deal firmly with the organisers of the so-called “conversion” programme.

An official report said 195 members of 55 families participated in the “conversion” programme. They had apparently been living there for over a decade.

Several Muslim groups Wednesday gave a 72-hour ultimatum to the district administration to arrest the organisers of the programme.

“It is a conspiracy to defame the Hindu organisations,” said Avinash Rana, state president of the youth wing of Hindu Jagran Manch.

Dharmendra Gola, another leader of the Manch, said it was all voluntary and they were all happy to return to their “homes”, but some elements pressured them to change.

A fair investigation will bring out the truth, he added.

Siraj Qureshi, president of Hindustani Biradari, said: “All this is being done with an eye on the Mission 2017 UP assembly elections. But this is wrong. This kind of politics of hatred must stop. Sensible people on both sides should assert themselves.”