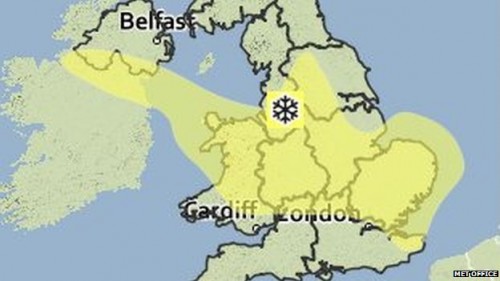 Snow could cause disruption across large parts of the UK later, the Met Office has warned.

An “area of rain, sleet and snow” will move eastwards across Northern Ireland, central and northern England and much of Wales on Friday, forecasters said.

The highest risk of snow is in Wales and central England, where up to 15cm (5in) could fall, even on low ground reported BBC.

Several centimetres is forecast elsewhere, but “some uncertainty surrounds how much snow will occur”.

A meaning “be aware” – has been issued for all the affected areas.

But there is potential for an amber warning – indicating people should be prepared – in Wales and the Midlands, forecasters warned.

The Met Office said there was “potential for disruption from snow”, especially for people travelling, and roads could turn “very icy” later.

A cold weather alert  for parts of England was issued on Friday morning, with forecasters warning of a 90% chance that severe weather between 15:00 GMT on Friday and 12:00 GMT on Wednesday could “increase the health risks to vulnerable patients and disrupt the delivery of services”.

“A depression will track south-eastwards across England and Wales during Boxing Day, clearing south-east England overnight. A spell of snow is likely, even to lower levels, on the northern flank of this depression. South of the depression centre, rain will fall, heavy at times,” said the Met Office.

The weather system is expected to move across the country before “clearing during [Friday] evening and overnight” – though the weather warning applies from 11:00 GMT on Friday until 06:00 GMT on Saturday.