David Cameron was forced to interrupt a pre-referendum trip to Scotland on Thursday as the Conservative leadership scrambled to deal with the surprise defection of a hardline Eurosceptic MP to Ukip, triggering an early byelection. A major operation by the Conservative whips, launched within minutes of the announcement by Douglas Carswell, ensured that fellow Eurosceptics echoed the prime minister in warning that future defections to Ukip would make an in/out EU referendum less likely by boosting Ed Miliband and Labour, a Guardian report said. 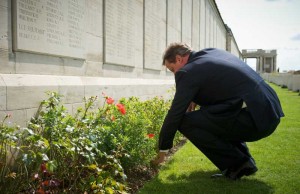 “The whips appeared on Thursday night to have contained the threat of further defections in the immediate future as the former defence secretary Liam Fox, the senior backbencher Bernard Jenkin and the MP Jacob Rees-Mogg – all independent-minded Tories – distanced themselves from Carswell.

Carswell presented the Tories with a dangerous byelection when he threw a hand grenade into Cameron’s general election preparations by announcing that he was defecting. He is the first sitting MP since 1982 to resign his seat to allow him to stand for another party. “The problem is that many of those at the top of the Conservative party are simply not on our side,” he said. “They aren’t serious about the change that Britain so desperately needs.”

But Cameron, speaking from Scotland, warned that Carswell’s defection would only benefit Labour, the report added.

The prime minister said: “It is obviously deeply regrettable when things happen like this, when people behave in this way. But it is also counter productive. If you want a referendum on Britain’s future in the EU – whether we should stay or go – the only way to get that is to have a Conservative government after the next election. That is what, until very recently, Douglas Carswell himself was saying.”

Mark Reckless, a close friend and Oxford contemporary of Carswell’s who had been identified by senior Tories as the next possible defector, said on Thursday night that he had no plans to leave the Tories. Reckless told the Guardian: “Douglas is a friend so I don’t want to criticise him personally. If people want a vote for an independent Britain they need a Conservative government.”

“Nigel Farage, the Ukip leader who had personally negotiated Carswell’s defection in great secrecy without telling his closest aides until Thursday morning, staged the announcement with a theatrical flourish. Journalists were given short notice to appear at a Westminster press conference.

With cameras crammed into a darkened room at One Great George Street, Farage walked in with Carswell to declare cheerfully that he had brought in the media on false pretences. Carswell then announced, to cheers from Ukip supporters, that he was abandoning the Tories to join Ukip after accusing Cameron of failing to deliver change on Europe, the report added.