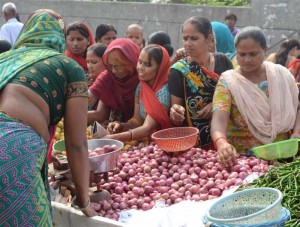 According to data released by the ministry of commerce and industry, food inflation eased to 8.64 percent in April, sharply lower from 9.9 percent recorded in the previous month. Fuel and power inflation declined to 8.93 percent.

Overall vegetables prices rose by 1.34 percent during the month under review. A sharp jump was recorded in potato prices that became costlier by 31.56 percent year-on-year.

“We are encouraged that the inflation numbers are coming down. On the whole at the moment, it appears that we are on track as far as inflation is concerned,” Mayaram told reporters.

However, there was need for caution considering the possibility of El Nino and deficient monsoon, he said.

Consumer price-based inflation rose to a three-month high of 8.59 percent in April largely due to higher food prices, according to official data released earlier this week.

For February, the final WPI inflation data is revised upward at 5.03 percent from 4.68 percent reported originally in March.

“The headline inflation has shown a dip on the back of moderation in prices of food articles, fuel and power. However, given the recent increase in the diesel prices and uncertain outlook for monsoon, price movements will have to be critically watched going ahead,” said Sidharth Birla, president, Federation of Indian Chambers of Commerce and Industry (Ficci).

“For the new government this would be the single biggest challenge. We look forward to a comprehensive action plan to tackle this situation,” Birla said.

Primary articles inflation stood at 7.06 percent, while inflation in manufactured products was recorded at 3.15 percent in April.