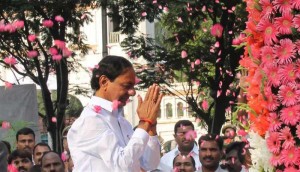 His election was an unanimous affair with all opposition parties supporting his candidature.

Chief Minister K. Chandrasekhara Rao and leaders of all parties congratulated Chary and escorted him to the speaker’s podium soon after Jana Reddy announced his election unopposed.

The chief minister said Chary’s role in Telangana movement would always be remembered, adding that Chari was active in the movement even before the TRS was floated.

Jana Reddy, who is the leader of Congress, TDP’s T. Srinivas Yadav and the BJP’s G. Kishan Reddy assured full cooperation to the speaker in smooth conduct of the proceedings.

A founder member of TRS, 58-year-old Chary represents Bhoopalapalli constituency in Warangal district. A post-graduate in English literature, he was earlier associated with the TDP. He served as the TDP legislator between 1994 and 1999. He lost the 2009 elections but was elected in the just concluded polls.

Another TRS legislator, Padma Devender Reddy is likely to be elected deputy speaker. The opposition parties are demanding that the post be given to them. The issue will be decided later in the day at an all-party meeting convened by the chief minister.