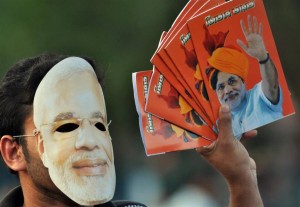 Foreign investors are optimistic on India and inflows are likely to surge if a stable government is formed under Narendra Modi after the general election, the head of an industry chamber in Europe has said.

Sunil Prasad, secretary general of Brussels-based Europe India Chamber of Commerce (EICC), said investors in Europe and other parts of the world are bullish on India despite recent slowdown in growth as fundamentals of the economy remain strong.

“Narendra Modi is a no-nonsense person. Businesses are hopeful that if he comes to power, things will move really fast,” Prasad told IANS during a visit here.

Prasad, who was in New Delhi to release a study report on European investments in India, said revival of inflows must be the priority of the new government as this is essential to accelerate growth and create jobs.

“The focus has to be on reviving overall investments, not just FDI. It is a smaller part. A lot needs to be done to revive domestic investments,” Prasad said, adding: “Corruption and policy paralysis have dented overseas as well as domestic investors’ confidence in the Indian economy.”

Foreign direct investment (FDI) to India declined marginally by 0.6 percent to $20.76 billion in the first 11 months of the 2013-14 financial year ended March 31, according to latest data available with the Department of Industrial Policy and Promotion (DIPP).

However, investments in the services sector, which includes banking, insurance, research and development and outsourcing among others, dipped by 54 percent to $2.18 billion during April-February period of the last fiscal.

Domestic investments have also dropped sharply, pulling down economic growth to its lowest level in a decade.

India’s top economic policymakers, including chairman of the Prime Minister’s Economic Advisory Council C. Rangarajan and Planning Commission Deputy Chairman Montek Singh Ahluwalia, have also admitted that the decline in savings and investments and delays in completion of projects have hurt economic growth.

India’s gross domestic product (GDP) growth fell to 4.5 percent in fiscal 2012-13, the worst performance since 2002-03, and is estimated to grow at 4.9 percent in the year ended March 31, according to the Central Statistical Office (CSO).

Prasad said low growth does impact investors’ sentiments but the bigger issues are related to corruption and policy.

“The whole world is watching India. This election is a make-or-break for the Indian economy,” said Prasad, adding the economy may fall in the trap of slow GDP growth if a strong and stable government is not formed after the elections.

Prasad said just setting FDI limits higher, as the government has done in the past two years, is not enough. “The focus has to be on implementation and there should be consistency in the policy,” he said.

On the BJP’s announcement that it will reverse the FDI policy in multi-brand retail, Prasad said: “Investors expect consistency in the policy. Reversal of any policy will have an adverse impact.”

Prime Minister Manmohan Singh’s government has allowed up to 51 percent FDI in multi-brand retail. The announcement was made in September 2012 but no foreign investment has taken place in the sector so far. In its election manifesto the BJP has said it would keep FDI out of multi-brand retail.