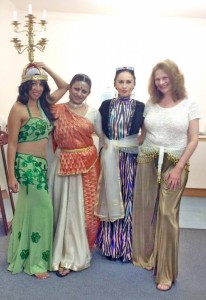 Why do the beautiful dancers and dances of the Middle East and Asia seem so mysterious and inaccessible?
Why, in many cultures, are female dancers often seen as overtly sexual – think Dance of the Seven Veils, but is this the whole story?
Lingua Franca World Music Productions have brought together three professional performers from different dance genres from around the world to explore the experience of the Universal Woman behind the dance. How does the dancer relate to the world around her? What roles does she take, both in relation to her own culture and to express the very essence of the female experience?

Narrated by world music DJ and broadcaster Geli Berg, and celebrating the talents of international dancers, Samara Phillips, Kanchan Maradan and San’at Mahmudova, Behind The Silken Veil, examines the various aspects of womanhood through dance – in relation to the elements and nature, as an emotional and spiritual being and finally as a woman in all her glory.
Kathak dancer Kanchan Maradan from Mumbai, India, San’at Mahmudova from Tashkent in Uzbekistan and UK-born Egyptian dancer Samara, who is of Moroccan descent, are all represented by the Manchester-based agency. All three dancers have an established international reputation, but are less well known on the mainstream arts scene here in the North West, a region which struggles for world music audiences.

The Performing Arts Network and Development Agency (PANDA), Lingua Franca won the opportunity to be mentored by the Cheshire Rural Touring Network to produce a new touring production and.
The show is in the format of a live radio feature which explores the essence of the feminine through cultural contexts, but with additional visual impact, using interviews, performances, poetry photography and narrative.
The project was very well received at a recent work in progress showcase in Manchester. It will be premiered at Mollington and Backford, Upton and Tattenhall through Cheshire Rural Touring this month.
“This is an exciting opportunity for all of us. Not only are we finally able to bring the richness of these forms of world dance to new audiences, but it is a huge thrill for me personally to be collaborating with such a wealth of talent. The process of exploring the cultural similarities and differences between the dance genres is fascinating, as are the common threads in how women everywhere relate to the world through their physicality, emotions and spirituality,” explains Geli,
who’s the senior producer and presenter of Cultural Collage on ALL FM 96.9 Community Radio in Manchester.
====

Indian nurses migrating abroad for better pay packets
Indian nurses, the backbone of the healthcare sector, are leaving the country in droves for higher salaries abroad, mainly to “arrange for dowry” and “repay education loans”.

Battling with low salaries and inadequate working conditions, these Florence Nightingales of India are seeking better pay packets abroad that will benefit them and their families.

With a total healthcare workforce of 2.2 million and a population of over one billion, India’s nursing density (7.9 per 10,000 population) is well below international standards and is inadequate to meet the current domestic health services needs.

“Low salary is a huge issue in India. Most of the nurses who leave India, specially those from Kerala, say they have to work abroad to earn their dowry,” Neelam Deshwal, head of the nursing department at Fortis hospital, Faridabad told IANS.

Deshwal, who has served for 16 years in the Indian Army, said when she conducts exit interviews at her hospital, most nurses tell her they were leaving India due to the higher salaries abroad.

“They tell me that they come from middle and lower middle class families and dowry is present in their communities due to which they have to earn more money,” she said.

Repayment of educational loans was another factor, she said.

“These girls come from poor families and most of them take loans to fund their education. So they have to work abroad to repay it,” she said.

She also said that many want to support their families, especially old parents.

A recent study on the nursing brain drain in India says that up to one-fifth of the nursing labour force may be lost to wealthier states due to migration.

As long as striking global disparities in nursing incomes persist, it will be difficult to stem the haemorrhage of nurses migrating – albeit temporarily – in pursuit of better pay, the study said.

Said Preeti Trikha, a nurse at Paras Hospital, Gurgaon: “Though in India the working conditions are fine, the salary is too low.”

However, things have improved over the years. Nowadays, private hospitals are paying more, she told IANS.

“But I feel nursing is a dedicated profession and only people who have the courage and ability to work for long should take it up,” Trikha said.
Women in India are largest online food shoppers
Indian women have come a long way from being homemakers to being the largest consumers of online food. They are dynamically using the handiness of internet services for satiating the food choices of their families, a survey says.

A comprehensive survey conducted across the metros by a leading online food portal, Tasty Khana, brings forward the online food habits of women in the country.

As per the survey, 65 percent like to opt for variety of food and cuisines, 69 percent of customers prefer making online payments and 70 percent find online order placing more convenient over calling up restaurants.

The survey brings out the factor that ‘word of mouth’ is the most effective tool in attracting women to the brand.

“Being in the food business, we have experienced that a large number of our food orders have been coming in from women customers,” said Shachin Bharadwaj, CEO & founder, Tasty Khana.

Today 70 percent of women prefer placing an online food order over phone calling and are more brand loyal, to ensure the quality of food for themselves and their families.

“Besides, in a country like India where food is prepared with love and care by the woman of each family, it was important for us to know the change in behaviour of these women in terms of food choices and preferences. Thus, we felt a need to conduct a survey on our female customers and get a deeper insight,” said Bharadwaj.