Cooking under tremendous pressure was difficult; surroundings including the utensils were not familiar, and she was under the constant watch of TV cameras, but her love and passion for food kept her going.

Meet Kalpna Mistry, who stormed the Channel 4 competition –The Taste– with her self-taught culinary skills and Gujarati influence. Another feather on her chef cap was when she gained a place on Team Nigella

“Initially, I was quite nervous especially in one of the episodes where I made ‘khandavi’/ ‘papri’. My nervousness was mainly due to the new environment but you get used to it though,” said Kalpna who’s a home cook.

inalist on ‘The Taste’, where Nigella Lawson, Anthony Bourdain and Ludo Lefebvre were the judges.

Many of Kalpna’s recipes are her own or improvised ones. “Basics of Gujarati food was taught by the many women in my family. The biggest influence in my cooking was my grandmother. She was amazing, taking the simplest ingredients and turning them into an invariable feast. I draw my inspiration from what I like to eat, thinking of what flavours go well together. I also get influenced by the countries I visit such as France, Spain, Far East and the Middle East,” said Kalpna whose other passions include travelling and shopping at local food markets.

She’s an expert in traditional Gujarati dishes, mainly vegetarian, British dishes such as Lancashire Hotpot and cheese and onion pie to exotic Middle eastern dishes like couscous, tagines as well as Yottam Ottolenghi’s favourite the lemon polenta cake infused with cardamom and topped with pistachios.

“Basically all the food I like to cook and eat everyday. My dishes aren’t pretentious but good home cooked food to be enjoyed in an informal setting with friends and family,” said Kalpna who hopes to add her teaching and scientific knowledge to bring out some kind of an order to her recipes.

Asked how she came to know about The Taste, she said, “The first time I heard about the programme was when I was following Nigella on Twitter. At that time, it was being shown in one of the TV channels in the US. I tweeted her saying that how nice it would be to start a similar programme in the UK also as I am not a professional chef; she then sent me a tweet saying that the programme will soon be launched in the UK.”

Knowing that Channel 4 will be airing the programme, Kalpna’s excitement knew no bounds. “I filled up the forms sitting on my dining table. Later, I was called for an audition in London. Out of 1,000 participants, 25 were shortlisted for the first episode of the show on Channel 4. The number was further reduced to 12.” 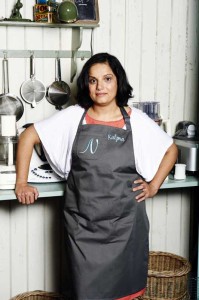 “I love to eat and have new experiences when it comes to food. I was on Nigella’s team and my dishes were put forward for the immunity challenge more times than anyone else’s. I think Nigella liked my food. Now I’m hoping that this will be the springboard for me to take my food and my regional (Gujarati) food to the masses,” said the 47-year-old science teacher from Ashton-under-Lyne “.

Born into a Gujarati family, Kalpna along with her parents moved to the UK from Tanzania in 1968. “I grew up in Birmingham where my parents still live. I came to Manchester after my marriage,” she added.

Recalling her childhood days and how she honed her culinary skills, Channel 4’s The Taste semi-finalist, said: “I learnt a lot about cooking especially from my grand-mother who used to live with us. In those days, both my parents were working so I used to help my granny in the kitchen. As I started growing older, I fine tuned my skills.”

Kalpna’s love for food and passion for cooking helped her to face the challenges of the competition. “I get immense pleasure when people feel happy after tasting my food, and, this is what I stuck to during the competition. Also, I know quite a lot of Gujarati cuisine, so I used the techniques during the show,” said the aspiring food writer.

However, the home-cook turn celebrity said that the sheer pleasure of vegetarian dishes throughout India is “highly under-rated”. “For instance, ‘Patra’ is a superb dish but people in the show didn’t believe that it’s not made out of meat. Therefore, vegetarian food too can be tasty and interesting, and that was my main focus in cooking the dish,” she added.

Along with good memories, Kalpna brought home some useful techniques she learnt from Nigella. “Earlier, I never used to taste food before serving but now, I do. And Nigella also taught me some alternatives when it comes to spices.

“For example, if you’re running out of garam masala powder, then you just add the spices in oil, heat and then add the hot oil in your food, it does the work of the powdered spices,” said Kalpna who also organises private cooking classes.

“As an educator, I believe that my role is to pass on my experiences and knowledge to others so that they too can learn and grow,” Kalpna signed off.