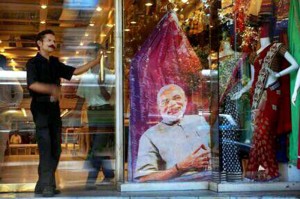 Narendra Modi is man of the moment. If his agenda and vision led to the Bharatiya Janata Party’s triumph at the hustings, his influence is looming large over the nation’s fashion scene too and yielding rich dividends for designers.

In the highly volatile fashion world, where style statements change with changing seasons, Modi’s wardrobe, simple yet polished, is making a wave.

Of course, there is nothing literally fashionable about Modi, who is on his way to becoming India’s 14th prime minister after his party’s landslide victory; yet his style quotient is swaying the masses.

In their bid to cash in on the “Modi wave”, designers are experimenting and innovating with creations inspired by his crisp and varied wardrobe that he dips into for every event and occasion. From his half-sleeved kurta teamed with Nehru jacket with fitted-pyjama form the ‘desi’ yet chic ensembles available on designers’ shelf and e-commerce portals.

Kapil and Mmonika Arora have come up with exclusive Modi inspired line in cotton fabric with the tag line – “Old Classic but new vision, New India”. Their line offers Nehru jackets, kurtas-churidaars in colours like orange, rust, white, off white and coffee brown.

“We all know Modi is in the news. With this collection, people will not only follow his ideologies but also get a chance to adapt his fashion sense,” Kapil told IANS.

Business is booming for the duo.

Mmonika said: “Business is amazing as the trend is very much in these days. Modi’s style is in for almost all age groups – for instance college students like it a lot. The fashion is sported often in cities like Delhi, Mumbai, Varanasi and Gujarat.”

E-commerce site Modimania.com is not far behind – one can also shop by simply logging in to the website and following the simple steps.

The about us page of the site reads: “Being a Modi lover, admirer and follower, we are launching Modi Cut Kurta and his accessories with the label of modimania.com.

“We hope that all the Modi lovers and his followers will not leave any stone unturned to make our initiative popular. Jai Hind! Jai Bharat!”

The influence has not been restricted to men’s fashion.

Mumbai’s popular sari store Paaneri has launched a collection of georgette saris with digital prints of Modi’s face, which was a hit.

“The respone is very good. We had launched the sari on Monday and we have sold close to 160 pieces and have also received additional orders for the same. It’s priced at Rs.2,150. The saris are available in different patterns,” said Vinod Gada, CEO Paaneri told IANS on phone from Mumbai. The shop has branches in Thane and Dadar.

“Following Modi’s victory in the Lok Sabha election, we think we will have to make lots more Modi inspired saris,” he added.

There are designers taking inspiration from other political parties like Arvind Kejriwal’s Aam Aadmi Party (AAP) to young face of Congress Rahul Gandhi (RAGA), but Modi is in focus there too.

Mona Lamba and Pali Sachdev, the famous designer duo from Kolkata, recently came up with a collection inspired by Mamata Banerjee’s Trinamool Congress, but they also have a lotus motif for Modi’s supporters.

Apart from Modi, ther are takers for all kinds of political merchandise.

Bluegape.com, another online fan merchandising store, has established a market for political merchandise.

“Fan merchandising was a fairly new concept in India when we started off, but it has picked up the pace since then; it caught the eye of people faster than we expected,” Sahil Baghla, co-founder and chief executive officer, Bluegape.com said.

They are getting encouraging response from the consumers, especially youngsters. And revenues are overwhelming.

“We have made a killing on our political merchandise collection and it has been a major hit among the masses. It had contributed more than 30 percent to our revenue at its peak before elections. A majority of our buyers are young, educated and professional people.

“Major metros including Delhi and Mumbai, Hyderabad and Bangalore have contributed the most, but Tier I and II cities are not far behind. Metros’ share comprises more than 60 percent and rest is from other places, including heavy demand from Varanasi as well,” said Baghla.

So take your pick and get politically fashionable this season.