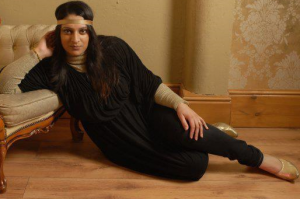 Manchester-based Sabeena Khan has a mission in life. The mother of four children and, a lecturer in business studies, Ms Khan whose pen name is Sabz, has embarked on a journey to keep written Urdu alive in the country of her birth. She tells Anjana Parikh about her debut book Kadam (Steps)– a compilation of poetry, which is both in Roman-format English and Urdu, and how it introduces the written form of the language to people who may be able to speak the language but not appreciate the beauty of its written form.

What prompted you to write Kadam?

Well, if I ponder on this thought of what led me to become a writer, I would say several hear felt factors affected me personally. Being a British-born Asian, I had this rich cultural association and this beautiful language that I was conversant in but unfortunately, not literate in it at least to a good standard.  However, that didn’t deter me from using my language; as I was engaging more into the wider community and society, my conversation skills were appreciated. Despite all this, I used to hold myself back because literature in all forms be it digital media or TV, or new books, were written in original language scripts and I couldn’t understand them. But this didn’t stop me rather I started to analyse the role and use my language skills with a view to make it more useful and practical. I realised that without thinking informally, I was using Roman format, therefore, I took a pen and paper, and poured my heart out…

Why should people read your debut book?

Well, there are no stopping poetry lovers from all walks of life as this book is the first of its kind in the UK which is in four languages–Urdu, Punjabi, English and Roman format. So anyone and everyone can benefit from the message each poem conveys.

In terms of inspiration for people who enjoy Asian languages but cannot read the script like me, this book will help them as it’s written in a Roman format (Urdu and Punjabi).

It’s great to read but it’s even more amazing to be part of bringing about a change and support, maintain the up-skilling of a language to steer it away from decline.

Do you think that the British Asians are losing the ability to write what they speak?

Yes, definitely, but I assure you I won’t let this happen. I’ve put my professional career on one side and, I’ll continue to do so till I feel that I’ve served the purpose to create awareness and promote the use of our language among the British Asians.

Do you fear that languages –be it Urdu, Hindi or Punjabi, may be classed as a dialect in future?

The fact remains that languages that are not in written format are classed as dialects. Bearing in mind, due to the vast majority of British Asians who have learnt to speak and understand their languages– be it Urdu, Punjabi, Hindi or Bengali– from their parents,  however, the written skills have not been systematically upheld as they probably would have had they been based in the Asian subcontinent. So yes, the language skills we posses as British Asians here in the UK, are mostly dialect for us, which is unfortunate.