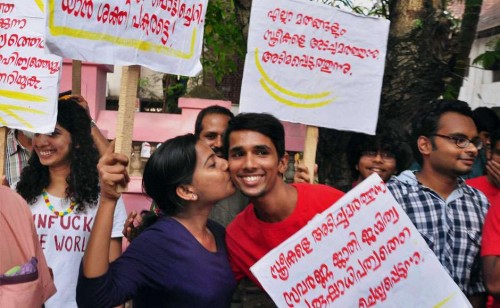 It was absolute disappointment for people here in Kerala who had gathered for an event named “Kiss of Love” organised by a group of youth to protest the increasing moral policing in the state.

The event had generated huge interest in the social media after the group announced that they would assemble at the Marine Ground here sunday  evening and hug and kiss.

“Kiss of Love” was meant to protest the recent attack on a cafe in Kozhikode after a TV channel showed young men and women hug and kiss when they come to the place for snacks.

Even as police denied permission for the event, the organisers were adamant and said they would definitely assemble.

Police in large numbers arrived at the site which also saw many political and social groups lining up against the event.

Sensing trouble, a group of around 35 youth – both men and women – assembled near the Law College, away from Marine Drive.

Police arrived at the spot and whisked them away in a van.

However, while they were being taken into the van, some of them hugged and kissed each other.

When people waiting at the Marine Drive came to know that the organisers were arrested, the groups both for and against the event shouted slogans. Police soon brought the situation under control.

P. Rahul, an organiser, told the media after being arrested that the event was a success and got a huge response.