The Bharatiya Janata Party on Wednesday said the 16th Lok Sabha should be the one which passes the much-delayed women’s reservation bill. 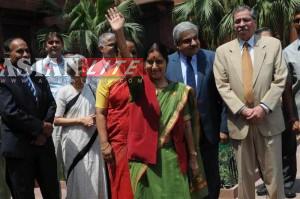 “A lot of parties have spoken about women’s empowerment, but we have done our bit by making a woman the chief minister of Gujarat. We also have 25 percent women in our cabinet and even the speaker of Lok Sabha is a woman,” External Affairs Minister Sushma Swaraj said during a debate in the lower house on the motion of thanks on the president’s address.

Urging all members of the house to support the bill when it is introduced in parliament, Swaraj named leader of Congress in the Lok Sabha Mallikarjun Kharge and said: “I request you to support the women’s reservation bill when we introduce it just as we did when you introduced.”

The government Monday announced a policy of “zero tolerance” for violence against women, and said it was committed to providing 33 percent reservation to women in parliament and state legislatures.

The bill, which reserves 33 percent of seats in parliament and the state legislatures for women, lapsed for the fourth time with the 15th Lok Sabha holding its last sitting ahead of the April-May general elections.

Swaraj said the Congress lost badly in the Lok Sabha election due to non-performance, while the BJP succeeded as its “product” was good and became a hit with the people.

“Let us be clear that the product should be good. If it is not, then marketing will make no impact. Our product was liked by the people because of its quality,” she said.

“You also did your marketing. But there was anger against your government… People accepted Narendra Modi as an alternative and the candidates (of the ruling alliance) became secondary. People cutting across caste and creed voted for Modi,” she said.

“People had thought that the era of single party majority has ended. But this time, it is unique as the BJP has got 282 and the NDA 336… When we talked of getting 272-plus (seats) on our own, people laughed,” she said.