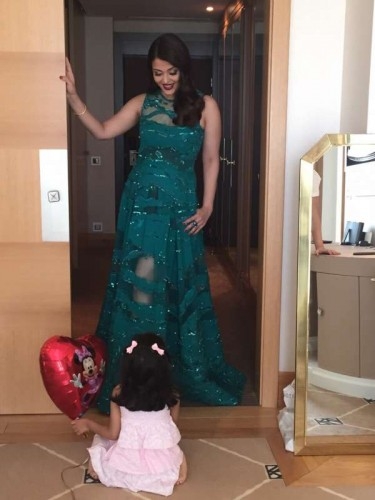 As Aishwarya Rai Bachchan dazzled in an Elie Saab emerald ensemble, the selfie fever gripped the Bollywood actress when she bumped into her friend and Hollywood actress Eva Longoria at the 68th Cannes International Film Festival here.

The actress, who is attending the film festival as a L’Oréal Paris ambassador, looked resplendent as she completed her look with a matching emerald liner and sported a fusion of brown and ivory eyeshadow. Her hair also complemented the look in loose waves that fell over her shoulders making a soft and subtle statement at the red carpet.

Talking of her co-ambassador, Aishwarya reminisced about the time they spent together at the film gala.

“Eva and I became friends in Cannes, L’Oréal Paris brought us together. Cannes is the queen of all festivals and there is an incredible surge of energy that thrives here,” Aishwarya, 41, said in a statement.

They took a selfie to cherish their red carpet moment .

With soft tones of pink on her cheeks, Aishwarya added a dash of edgy glamour to her look with a bold wine colour on her lips. The “Devdas” actress accessorised her look with shoes by Elie Saab and jewellery by De Grisogono.

Earlier in the day, Aishwarya also did a shoot for L’Oréal Paris with Eva Longoria, Natasha Poly and Li Bingbing. The Indian beauty also stressed on gender equality with Hollywood star Salma Hayek at a UN women’s panel discussion.