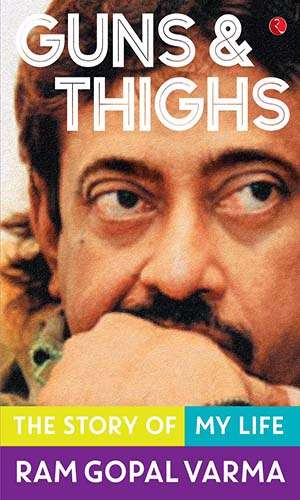 No book in recent times has been so gross, flagrant and outright sexist as film director Ram Gopal Varma’s “Guns and Thighs”. After it received publicity for its reference to actor Sridevi’s “thunder thighs”, a reading of the narrative may leave you squirming.

The unintellectual director has reduced women to mere sources of voyeuristic pleasure and objects of sexual desire, even though he professes to sometimes praise them.

Much like most of his films, “Guns and Thighs” (Rupa Publications Pages: 199 Price : Rs 500) may horrify the sensibilities of many with it’s “contrarian and politically incorrect” views, as the book cover aptly suggests.

The views of the director come into play as he unapologetically professes his love for metal and flesh as a young movie-goer. “I was obsessed with films and everything in them. Be it the gun in Amitabh Bachchan’s hands in Zanjeer or Sridevi’s thighs in ‘Himmatwala’… everything about films used to give me almost orgasmic pleasure,” he writes.

In the pages that follow, he rambles unabashedly about women. “I’ve always believed that men are about power and women are about sex and everything else about them is just a function of religious, social and moral programming,” he writes.

Varma, who has delivered a few hits (in Hindi) like “Satya” and “Rangeela” and responsible for discovering talents like Urmila Matondkar and director Anurag Kashyap, has tried to maintain his “rebel and tough” guy demeanour throughout the book.

In one instance, he has gone on to justify his actions in getting the first break, Telugu movie “Siva” by conning his colleagues. “I conned and lied to everybody concerned, but the one and only truth was that I genuinely believed that ‘Shiva’ would be a far superior film to whatever Kodandi Rami Reddy (popular Telugu filmmaker) might make,” the book said.

As one leafs through the pages, one sees misogyny often reaching a peak in the director’s so-called praise of women. “I have captured Sridevi’s beauty as a cinematic goddess in my mind’s camera and as a divine angel in the heart of my celluloid dreams. I thank god for creating Sridevi, and I thank Louis Lumiere for creating the movie camera to capture her beauty,” says Varma who devoted an entire chapter on his adulation for the actress. He seems to be removed from reality and one wonders which time and place he lives in.

Later, his camera eye gazes into Sridevi’s private life. “I saw her at Boney’s house serving tea like an ordinary housewife. I hated Boney Kapoor for bringing that angel down from heaven to such an ordinary, humdrum existence,” he writes.

Machoism and irreverence run throughout the book. The description of ‘Bullet’, a student in his college days, who caused heart ache and sleepless nights may be attributed to adolescent musings. But the pages that follow only shows that Varma’s thinking hasn’t developed. One wonders if he’s even heard of gender equality. “Someday, I will make a film based on the concept of a woman as a sexual being and call it “Rifle” as a tribute to her,” he says.

Varma has also used the space to defend some of his controversies following the tweet on Amiatabh Bachan under the influence of three or four vodkas. The filmmaker had tweeted profanities about the country’s biggest star for not doing roles like “Buddha Hoga Tera Baap”.

He also fulminates against use of beautiful women for social messages against HIV or other life-threatening diseases. “I find it highly objectionable to use beautiful women like Katrina Kaif, Aishwarya Rai and Deepika Padukone to draw attention to ugly diseases like AIDS and cancer. I think the only redeeming feature of this ugly world full of disease, destruction, violence and death is that God has created beautiful women… I think that it’s our duty towards nature and God to strive to keep a woman’s beauty away from ugliness so that it can be framed, protected and worshipped,” writes Varma.

Perhaps his insensitiveness saw its height in reply to his wife when she asked him to stay back for her birthday. “If you think the mere fact that you were born calls for celebration, don’t forget that when your parents had sex, the last thing they would have had on their minds while doing it was to conceive you in particular. Your dad had a desire and your mom obliged, and it was sheer accident that the particular spermatozoa which managed to enter your mom’s womb just happened to be you. Your dad could alternatively have gone to a prostitute and the particular spermatozoa through which that woman might have conceived could have been you and you could have ended up in a brothel,” he writes.

Varma also does not spare the media, with whom he has had a long love-hate relationship. “I would say that media is more dangerous than terrorists because it attacks under the guise of safeguarding values,” he says.

Read the book at your peril.