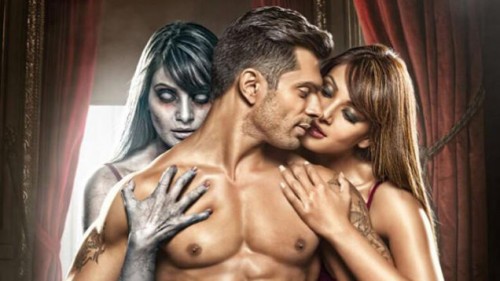 “Scary is the new sexy,” says actress Bipasha Basu ahead of the release of “Alone”, but Bollywood trade experts believe filmmakers have for long entertained viewers with ‘horrex’, an amalgamation of horror and sex.

“Alone” is not the first time that Bipasha has got up, close and personal with an actor on screen for a horror movie. She did it in “Raaz”, but she’s uninhibited in admitting that “Alone”, releasing Friday, is her boldest ever work.

Whether it’ll work for the film or not is yet to be seen, but a combination of intimate scenes and horror adds an intriguing touch to a horror film, says Bhushan Patel, who has directed “Alone”, about conjoined twins who had promised to be together and how the death of one sister leads to a series of chilling incidents.

“Sex and scares have always gone hand in hand in films. It is an integral part of the genre. If you see old English films like ‘Dracula’, they all had their share of sex (scenes),” Patel said.

Patel, who has directed films like “1920: Evil Returns” and “Ragini MMS 2” as well, says ‘horrex’ works like “magic” on the screen.

“When you add erotica into horror, it becomes more appealing and exciting. The formula has worked on a large scale. I think just erotica or horror by itself wouldn’t have garnered that much fascination as the combination has,” Garg said.

Just a cursory glance at films of late 1980s like “Veerana”, “Purani Haveli” and “Bandh Darwaza”, will prove that some thrills with titillating scenes can add some frills to a movie.

Patel says the inclusion of veiled issues like sex has always managed to capture attention.

“The fascination continues as it is the dark side. The dark side is interesting and alluring. Sex is a taboo and often scares people. People are indulging in it every day and so what’s wrong in showing it and talking about it?” Patel asked.

No matter how they defend the use of sex, makers of such movies have faced flak over making sex as the driving force of a film with no storyline.

Garg pointed out that the content in Bollywood films is well within limits thanks to the strictness of the Central Board of Film Certification (CBFC).

“I don’t think we can cheat anyone by using sex as a driving force due to restrictions in terms of how much the censor will allow. So one has to balance the two elements,” Garg noted.

Echoing this, Patel said: “Sex is a tool in horror films to take the story forward. I don’t think sex is used unjustifiably.”

Hence the staple ingredients of a Bollywood horror film: some spooky noises, a dark ambiance, a woman in distress, a hero, evil spirits, lovemaking scenes and sensual songs.

Distributor Rajesh Thadani held a different point of view and said that horror films have been reduced to sleaze fests to ensure success.

“It is the easiest way to make a successful film. The collections of these films is also decent,” Thadani said.

Adding to that, trade expert Vinod Mirani said: “Films, especially of the horror genre, in India are getting poorer in content.”

“Horror films lack in content and they try to make it up with sound effects, loud background music, low light choreography and, in desperation, sex,” Mirani told IANS.

It’s needless to say that movies like “Haunted – 3D”, “Raaz 3” and “Ragini MMS 2” were given ‘A’ certificate, making it open only to adult audiences. But the makers have no qualms as their target itself is adults only!