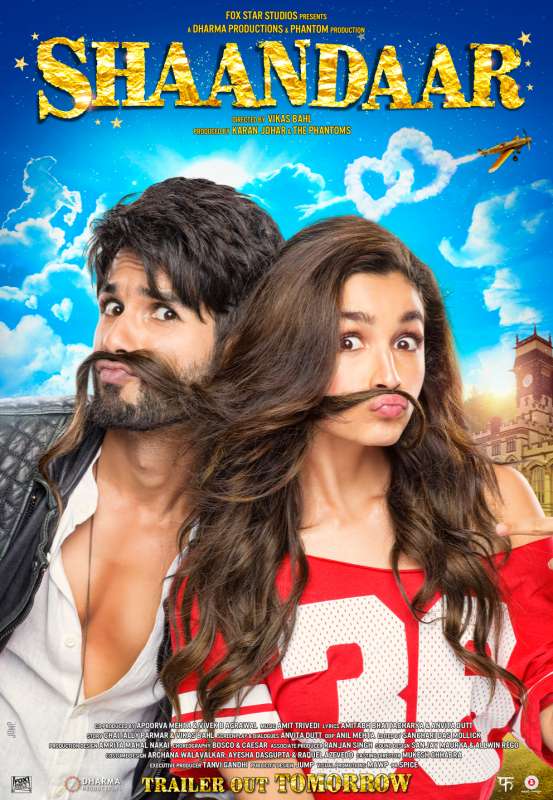 Treated like a fantasy film with a back-drop of an ostentatious Indian wedding, Vikas Bahl’s “Shaandaar” is actually the story of a father-daughter bonding. With a love story being an essential ingredient for a commercial Hindi film, that too, is thrown in for good measure.

Bankrupt and on the verge of penury, the wedding, is a business deal, pouts the matriarch of the Arora family, Kamala (Sushma Seth) during a family conference that consists of her three sons: Vipin (Pankaj Kapur), Viren and Vinay (Sagar Arya), daughter-in-law Geetu (Niki Walia), grand-daughter Isha (Sanah Kapoor) and an orphan girl Alia (Alia Bhatt) who has been adopted by Vipin.

Jagjinder Joginder (Shahid Kapoor) is the wedding planner who arrives to ensure the smooth execution of this big-fat-Sindhi wedding. Predictably so, he falls in love with the orphan Alia.

Isha, Vipin’s daughter, is the sacrificial goat in the family and is being betrothed to Robin (Diljit Dosanjh), brother of a rich Sindhi businessman Harry Fandwani (Sanjay Kapoor).

If the plot and premise of the film seem promising, it is the execution of the tale that is flawed and is the film’s undoing. Mounted on a lavish scale, the essence of the simple and somewhat sweet messages are lost, in the quagmire of cinematic gimmicks.

Also, the screenplay padded with basic animation and remixed songs like “Neend na mujkho aaye” or “Eena, Meena Deeka” does nothing to boost the pace and content of the film.

Humour comes in the form of absurd dialogues and situational moments with gags, which make the film appear more like a theatrical show with disjointed acts.

In an otherwise convoluted and slow-paced film, where the plot meanders aimlessly, what keeps you hooked are the good performances by the ensemble cast. While Pankaj Kapur as always is in control, yet, offers nothing exceptional by way of performance, it is his daughter, Sanah Kapoor as Isha who makes an impact in her maiden film. With an author-backed role, she is a sincere and uninhibited actor, who holds her stead among veterans and charms you with her simplicity and confidence.

Shahid plays the exuberant Punjabi wedding-planner to perfection and is equally the Prince Charming to the insomniac Alia, whether it is keeping her company at night or taking her horse-riding.

Alia, is her usual confident and energetic self, offering nothing new to her character. She dances with gusto and performs competently, but her role has shades of her oft-seen characters.

Sushma Seth, seen after a hiatus, portrays the dominating dowager astutely, lighting up the screen with her magnetic personality.

Sanjay Kapoor as the loud, obnoxious, gun-flaunting Sindhi, Harry Fandwani, in his gold attire is far from funny, but delivers effectively. Niki Walia makes her presence felt with a poorly etched character.

Diljit Dosanjh as the boorish, all brawn no brain Robin is competent. His obsession with his eight and a half pack abs rather than with his bride-to-be, is amusing.

And, Sagar Arya as Vinay Arora with limp limbs shines in a predictably written cameo as the family’s fashion designer.

Visually, the film is a delight with elaborate and opulent sets, picturesque locales and wondrous camerawork. The music is elementary with most of the songs having no contribution towards the progression of the narration. But nevertheless, they are well-choreographed especially Gulabo and the one which is captured in black and white.

Overall, you’ve seen the best of Director Vikas Bahl’s “Shaandaar” in the film’s trailers that hit the marquee months ago. The full length film offers nothing new and in fact disappoints.