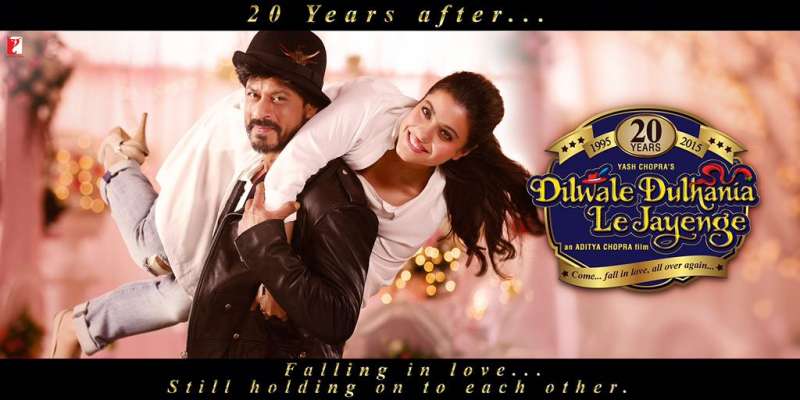 “Dilwale Dulhania Le Jayenge” (DDLJ) tugged at the heartstrings of one and all when it released way back on October 20 in 1995. Fast forward to 2015, Shah Rukh Khan and Kajol have brought the magic back by recreating the poster of the romantic drama. SRK is glad that even after 20 years they are “still holding on to each other”.

With the Aditya Chopra directorial, Shah Rukh and Kajol made their characters – a fun loving London-bred Punjabi boy Raj and NRI simpleton Simran – eternal and created a permanent place in the history of Indian cinema.

As Shah Rukh and Kajol are again working together in forthcoming film “Dilwale”, they seized the opportunity to relive the iconic moment.

SRK took to Twitter to share the DDLJ poster with the caption that read: “Want to thank team Rohit Shetty and Red Chillies for doing this last minute. All looked happy that I picked Kajol again.”

In the poster, Shah Rukh is seen carrying Kajol on his shoulder and both of them are all smiles. SRK is even sporting a fedora hat, which was central to his character in DDLJ.

The poster takes notice of the time gone by as it reads: “20 years after…falling in love…still holding on to each other”.

And it was SRK’s idea as he had earlier posted: “20 years of DDLJ round the hour now…hmmm…Kajol and me together doing another ‘Dilwale’ right now. Should do a pic with her!”.

Shah Rukh, who is busy shooting with Kajol for Rohit Shetty’s “Dilwale”, also asked his fans and admirers to watch out for a special video made for all the DDLJ adherants.

Shah Rukh wrote: “Celebrated enough tonight with ‘Dilwale’ team. But amidst mad shooting Rohit has a made a video for you all for DDLJ. Yrf will upload it soon.”

DDLJ brought a refreshing change as well as a clutter breaking and trend-making entertainer with all ingredients of a Bollywood masala potboiler — love, romance, comedy, action, melodrama, thrills, songs and dance — put together cohesively to tell a story of the victory of true love.

The film has a simple story — Raj meets Simran during an European holiday, love blossoms between them, but winning over the girl’s conservative family is not a cakewalk for the hero, who then makes every effort to take his ‘dulhania’ (bride) with him.

Th film holds the record of the longest running film in the history of Indian cinema as it continues to be screened at the iconic Maratha Mandir theatre here.