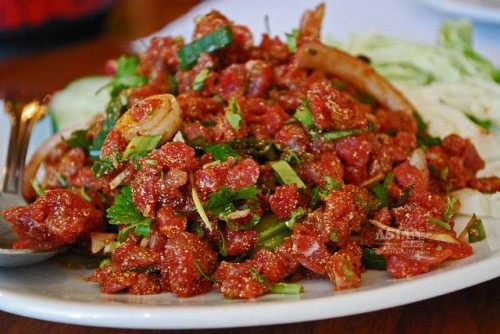 There are many things that underscore hypocrisy in Indian politics but the severe sentence to those who eat beef in Maharashtra and Madhya Pradesh is plain prejudice in a secular nation. If I am not a Hindu then I really have no right to stop a non-hindu from eating what he or she wants. By the same token Muslims should demand that no one eat pork in India.

To sentence people to five years in jail in Mumbai for eating a steak and seven years in MP for the same meal is more than the punishment for rape. How about that?

And though this ban will lead to thousands of job losses and a steep increase in mutton India continues to export beef, being the second largest exporter in the world.

You want to stop people exercising their freedom of choice stop your major export, this is double standard stuff and hurtful to those whose diet is oriented towards beef.

Even this purported assumption that buffalo meat is a possible exception to the cow slaughter ban is pointless. Imagine a guy eating buffalo being accosted by a bunch of holier than thou keepers of the faith: how the heck is he going to prove that what he is eating isn’t beef when it is. He will be lynched.

And not just this, the police have been given freedom to check on any suspicious dining table… so as you cut into your grilled meat there is a cop over your head wanting to know what you are eating.

I am a Hindu and I don’t eat beef. But I won’t stop the guy next to me if he wants to. And if he is not a Hindu conscience does not even get a look in.

It is also a question of economics. Mutton is three times more expensive than beef and for the less affluent beef was the one non-veg option they could exercise.

This is just scary. When the government begins to interfere in your private life and makes its decisions for you on what you can and cannot do then it is scary, really very scary.

What will they ban next as 1.2 billion human sheep silently allow the takeover of their freedoms. Tomorrow, your clothes, the way you live, what you can say, maybe even what sort of arts you can engage in… sorry, not acceptable.