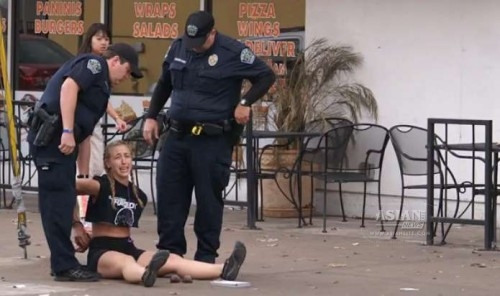 I so hate that Eminem song that uses a police siren as an instrument. Every time it’s on the car radio I have a heart attack. Why are the police following me and why can’t I see them?

Hot Tip: Make sure you look wildly off your head in your driving licence photo so that when traffic cops stop you and check it, the real-life you looks comparatively calm and sober.

Police are on my mind after a reader sent me a news item about cops who raided a brothel a few days ago and found four colleagues using it.

The really bad thing was that the embarrassed officers were supposed to be on an important assignment taking a murderer from jail to a clinic and back.

The really really bad thing was that during the arrests, murderer Baiju Yadav slipped away into the nearby township (this happened in West Bengal, India).

The really really really bad thing was that the murderer voluntarily returned to the prison that night and told police bosses that he was a good guy who hadn’t wanted to go to the brothel but the nasty cops forced him to. When a convicted murderer is telling people that in his opinion you and your mates are seriously bad dudes, your reputations are pretty much shot.

I told a gang of readers that that was the worst “bad cops” tale I had heard for a while, but they all tried to top it.

The American said that New York judges were so horrified by the corruption of bad cop Louis Eppolito that he was jailed for “life plus 100 years”, so technically speaking jailers will have to keep his corpse behind bars for a century. Imagine the conversation in, say, the year 2100. “Who’s in cell nine?” “Eppolito’s skeleton. He’s a bit on the quiet side.”

He also told me about a US policeman named Jonathan Garcia who used to sell drugs while in uniform. Wonder what his standard line was? “Come out with your hands up and check out these items available at a low, low price if you act now.”

The Hong Kong police force is angelically pure now but used to be bad. One Commissioner of Police was officially described as “an excellent law enforcement officer”, the only stain on his copybook being that he ran a string of brothels in the street next to police HQ. In 1971, civil servants decided to check out the personal property acquired by a suspiciously flashy police sergeant named Hon Sum: they found he had a fortune in the bank, two limousines and 49 homes.

Being a male-dominated group, our conversation quickly escalated into a “my officials are corrupter than yours” contest. The mainland Chinese representative, who always has to be number one in any discussion, held up corrupt official Lai Changxing who stole a world-beating $10 billion, but he was beaten by Indonesia’s Suharto, with an estimated take of more than $15 billion.

Meanwhile, if police DO stop you for speeding, I can certify that attempts to talk your way out of trouble with science don’t work: “If we factor in the 1,600 kmph speed of the earth’s rotation, we’re all speeding, right?”

Asian News from UK
Leading Newspaper for Politics, Business & Economy
The Funny Side