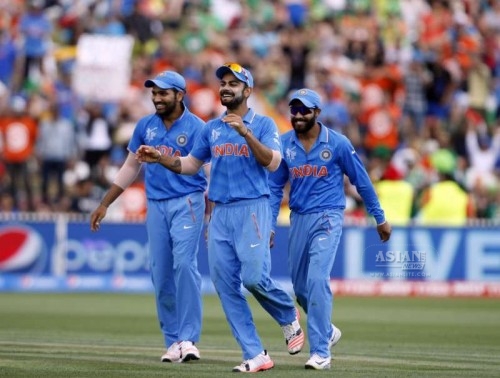 Where does one put one’s finger on for India staying unbeaten, winning all their five Pool B matches in the World Cup? For once, answers are easy.

The major achievement is that the Indians bowled the opposition out in all matches with all-round performances.

The batsmen gave enough for the bowlers to buy their wickets with their craft and when asked to bowl first the bowlers made it easy for batsmen. They complemented each other so wonderfully well.

Their winning streak goes back to the 2011 World Cup when they won the last four matches to win it and adding the five now Mahendra Singh Dhoni has overtaken Saurav Ganguly as the most successful captain. Ganguly had a marvelous run of eight straight victories in the 2003 edition in South Africa before losing the final against Australia.

Just before this World Cup, even the most ardent Indian fan was unwilling to wager on his country making the semifinals, let alone winning it.

It all changed so quickly. Just as well, India played the two toughest sides in the first two matches and beat both Pakistan and South Africa unexpectedly by big margins. From then on no looking back, the fight the West Indies put up was not even a hiccup, a mere pinprick.

All of a sudden, Dhoni looks invincible, even to those who were baying for his blood not long ago. His critics now say that he is a master limited-overs captain even if he is no longer the Captain Cool in Tests. He was hounded out of Test arena. Just as well, perhaps, a lot of burden is off his back and he seems to be enjoying the shorter versions of the game.

When most teams are still trying to get the right mix, trying out the bench strength, the Indians stuck to their winning combination. They did not tinker with the batting order, not even against Ireland after Shikhar Dhawan and Rohit Sharma put on a 174-run opening partnership. When the top order failed to come good against the West Indies, Dhoni put his hand up nursing lower-order Ravichandran Ashwin to win the game by four wickets.

Ironically, Ireland’s 259 is the highest score by a team scored against India. Big guns Pakistan, South Africa and the West Indies struggled to negotiate the pace as well as spin of the Indians. Still, India won with plenty to spare, both wickets and overs.

Bowlers are rarely given credit for their performance; cricket is all batsmen flaying about.

Seldom do the Indian fast bowlers look so lethal and the spinners tantalisingly mesmeric together. And to back them up, outcricket has been so excellent, with fielders diving left, right and centre to reach half chances and to cut off runs. Notwithstanding a couple of catches being grassed or bubbled here and there in their eagerness.

Umesh Yadav and Mohammed Shami are metred among the best at 145 plus kmph and third seamer Mohit Sharma’s deceptive pace and his back of the hand slower one made life difficult for batsmen.

Remarkably, all three pacemen are proving they not only have safe hands but also a good arm, effecting run-outs from the deep. The three bowled and fielded so well against Pakistan and South Africa, the Indian think-tank must have felt like finding a goldmine in the very first dig. They did not have to think of fiddling with the eleven thereafter.

India have to play Zimbabwe in their last pool game at Auckland on Saturday. Ireland and Zimbabwe have done enough to rattle the mighty. It is to be seen whether the Indians will at least rest a couple of key fast bowlers so that they can be fresh for the knockout rounds or carry on with the same eleven.

Not only bowlers, Ravindra Jadeja and Suresh Raina would like to get a good hit out in the middle. So will Dhoni despite his match-winning knock against West Indies.

The enigmatic Rohit has to be consistent in the next four matches if India have to do well. Dhawan has two hundreds, but he has to continue in the same vein.

Now everyone is talking about India and the others as challengers. What a transformation from almost nobody to somebody!