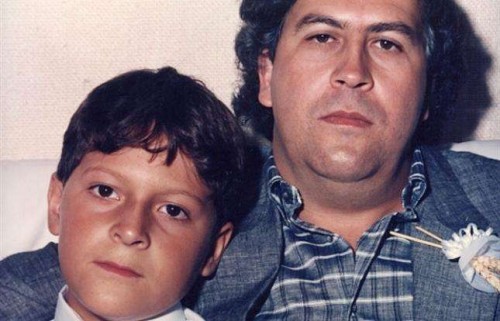 Juan Pablo Escobar Henao, son of Colombian druglord Pablo Escobar Gaviria, has said he is in favour of ending the global fight against drugs.

He told Spanish news agency Efe in an interview on Tuesday in Rio de Janeiro that after 40 years of “clear and compelling” failures in this war, it was time to start speaking of peace.

“The war has meant that people like my father have had the luxury of submitting, through violence and corruption, an entire country,” Henao said on the occasion of the publication of his book, “My father, Pablo Escobar”, by Planeta editorial.

The first-time writer was doubtful if the current global policy against drugs can put an end to what is considered a “public health problem”.

As he says, there would always be people like his father to “challenge and subjugate all democracies that may be necessary”.

According to Henao — who for years lived in exile under the name of Juan Sebastian Marroquin Santos — one disproportionate example of that war would be the 3,000 deaths that occurred in Colombia over “a single man” — his father.

After more than 20 years since the death of ‘El Patron’ (The Boss), his eldest son feels no anger or resentment towards the Colombian state.

However, he said: “It is unacceptable that we are being prosecuted for my father’s crimes, I understand the Colombian law says crimes are not inherited.”

The author, who will present his book on Wednesday at the Cervantes Institute in San Paulo, was also disappointed with his paternal family, who were sitting “on the side” of the bosses of the Cali cartel, the primary rival of Escobar’s Medellin cartel, “begging them” to kill the three closest people to the druglord: his wife (Henao’s mother) and their two children (his sister and himself).

Henao is certain they were the ones who betrayed his father and although he has forgiven them, he will never forget what they did.

“When you forgive you get rid of the pain caused to the perpetrator, but when you forget there is a risk of history repeating,” he said confirming he has no family ties with them.

This betrayal resulted in a chase that led the “Cocaine King” to live life in hiding for nearly a year.

This, ironically, was the “best” time the author spent with his father, till his death in an ambush by the Colombian army on December 2, 1993.

“My father had no other way and chose to be found that day by the authorities,” said Henao.

He broke his “golden rule” and used a phone, which alerted the Colombian authorities to his location.

According to Henao, 14 bullets in his father’s gun would always be reserved for his enemies and the last one for himself.

Henao also accused the forensic doctors, who performed his father’s autopsy, of lying because “they had been threatened with death to change the report”.

The Cocaine King’s son, who lived a life of fantasy and fairytale, says he has now laid bare the naked truth behind all that happened years ago, so that no one can tell tales to his son, the grandson of the man who terrorised an entire country for years.