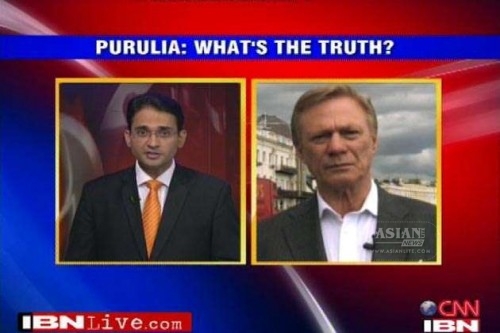 Title: The Night it Rained Guns: Unravelling the Purulia Arms Drop Conspiracy; Author: Chandan Nandy; Publisher: Rupa
On December 17, 1995, an ageing Russian AN 26 transport plane took off from Karachi ostensibly for Dhaka. After refuelling at Varanasi, it made a course diversion over Gaya, Bihar. When it was over Purulia in West Bengal, the plane flew dangerously low and dropped, amid darkness, four tonnes of deadly arms and ammunition, for the Ananda Marg, a semi-secret cult. It was, as author Chandan Nandy rightly points out, “one of the most bizarre and, admittedly, a spectacular operation to breach India’s security”.

Mission over, the plane returned to its original flight corridor, coolly landed at Kolkata’s Dum Dum airport, re-fuelled and took off for Phuket in Thailand.

Early the next morning, villagers over a wide area were startled to find in their fields and open ground all sorts of strange weapons. What rained from the skies was lethality: 10 RPG-7 rocket launchers, 300 AK-47s, 25 9-mm pistols, two 7.62 sniper rifles, two night vision binoculors, 100 grenades, 23,800 rounds of 7.62 ammunition, 6,000 rounds of 9-mm ammunition, 100 anti-tank grenades as well as 10 telescopic sights for rocket launchers. Purulia, which housed the Ananda Marg headquarters, had seen nothing like this. The cargo weighed 4,375 kg!

Unfortunately for the audacious conspirators, things went wrong when they decided to fly back to Karachi via India even after knowing that the operation had blundered and that Indian security forces – not Ananda Marg — were picking up the weapons. Nandy exposes in the book, most comprehensively for the first time, the “Neolithic incompetence” of the Indian security setup, before and after Purulia.

The irony is that RAW, India’s external intelligence agency, had been tipped off about the Purulia arms drop by Britain’s MI5. On November 25, 1995, RAW had officially alerted the Intelligence Bureau, the Cabinet Secretary, the Home Secretary and the Defence Secretary, mentioning, near accurately, where the arms delivery would be made. Yet, a full three weeks later, not only did the plane enter India, refuel in Varanasi, drop the cargo in Purulia, refuel (!) in Kolkata and then, from Phuket, flew to Chennai, for more fuel! That’s when the plane’s luck ran out.

After it took off from Chennai, Indian authorities ordered it to land in Mumbai. But even as it landed, more of plain stupidity on the part of Indian officialdom was in full display. There were no security personnel to apprehend them! Those Indian officials who approached the plane initially were more curious to know why the plane had landed! Amid the confusion, Kim Davy escaped!

Nandy, who reported the story for The Telegraph and later the Hindustan Times, has come out with what is undoubtedly the most gripping and authoritative account of a story whose many aspects are still shrouded in mystery. He rips through the “collective paralysis” that gripped the Indian security establishment after the RAW tip off. And this in a country that had battled Pakistan-sponsored terror in Punjab and Kashmir for years, and four years after losing a former prime minister to a foreign suicide bomber.

Nandy is certain – as are most of his sources – that Kim Davy must have been a front for a Western intelligence agency, in all probability the CIA. This is why the Danish authorities went out of their way to shield him even after the man, wanted by Interpol, surfaced in Denmark in late 1999 or early 2000. In 2009, almost mocking India, Kim Davy opened a Facebook page! By then, the Danes had stonewalled not just the pace of likely criminal proceedings but created a maze of bureaucratic red tape to prevent the man’s extradition to India.

Nandy is convinced that Denmark’s refusal to act against Kim Davy “was the result of pressure from a powerful Western state” (read the US). Even British intelligence became sullen after the Purulia airdrop. Kim Davy, Nandy says, was surprisingly able to visit the US four times before the arms drop despite being wanted in that country for two federal crimes. One RAW officer tells the author that only Kim Davy’s links with the CIA could have led to the unabashed protection the Danish authorities provided him. And a Pakistani company that serviced the AN-26 in Karachi airport was said to have links with a CIA front aviation company. As they shared with Nandy all that they had uncovered, officers from the Indian intelligence wondered if Kim Davy was a CIA ‘dirty asset’.

At the end of the “immensely vexing, extraordinarily complex and tangled” story, Nandy feels that the Narendra Modi government must revive the case, pursue every available means to bring Kim Davy to justice in India, and hunt down the Ananda Marg monks wanted in the case but who are still on the run. The UPA government had taken some unusually strong steps against Denmark; clearly more is needed.