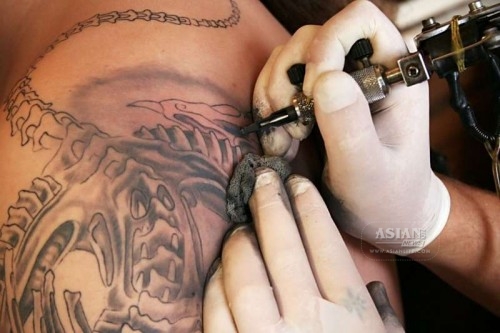 India has a good scope for aspiring tattoo artists, but the lack of skilled artists to train them professionally is turning out to be an obstacle, says tattooist Sameer Patange, the common denominator of celebrity clients like Hrithik Roshan, Sushmita Sen, Sanjay Dutt and Urmila Matondkar, to name just a few.

The growing fascination of youth with permanent inklings has opened up the possibilities for tattoo artists in the country over the years, says Patange, who has been in the business for 12 years now, adding there is scope for many more.

“There definitely is a good scope in India for aspiring tattoo artists, but the only problem is that the number of skilled artists is really low and the number of unskilled artists who are coming into the industry is very high,” Patange told IANS in an interview while he was in the capital at Aura Spa, The Park.

Trained under tattoo artist J.A. Kahiyar as a teenager, Patange went on to establish his tattoo studio in Mumbai, Kraayonz, certified by the Indian Medical Association for meeting all the health and hygiene standards. He also trains younger artists.

According to Patange, the best place for an aspiring artist to start is as an apprentice to a tattooist who has been working for a long time because he can give “cumulative knowledge of what to do and how to do in a very short amount of time”.

Getting a tattoo done should not be an “impulsive decision” – that is what Patange tells people who are keen to get inked.

“Make sure it isn’t an impulsive decision. Secondly, do your research. Find out where you’re going to get the tattoo from. Cheap tattoos are bound to be a disaster. So, spend a little more and get the best work done from a good artist,” he said.

While the most popular placements among women have been the ankle and shoulder-blade, Patange says males have always opted for biceps or the arm.

Speaking about the most opted-for tattoo designs, Patange said: “For women, the most common tattoos are butterflies, fairies, flowers and tinkerbells. Men usually opt for tattoos of Lord Shiva and a lot of other religious symbols.”

Young or old – there’s no upper limit to getting a tattoo done, but Patange doesn’t like inking those below 18.

“A lot of artists wouldn’t want to tattoo a person who is under 18 because the maturity level only comes in after you’ve passed a certain age. I wouldn’t tattoo anybody under 18, but there is no upper limit to getting a tattoo done,” said the artist.

He places tattoo enthusiasts in two categories – “the serious tattoo getters” and the ones who “get it for the heck of it” – and says he is more inclined to work with the former.

“As a tattoo artist, I’m obviously more inclined towards the serious tattoo getters because they understand what tattooing is all about,” Patange said.

Although working with celebrities can be a nervous exercise, Patange insists that the stars he has worked with have been “very normal” people.

“A lot of people fancy the fact that I have worked with all these people. When you work with them, you feel that they’re just like one of us, they’re very normal people.

“I never felt that I was working with a celebrity. All of them have been so down to earth and humble,” said the artist, who had inked Bollywood star Hrithik and his former wife Sussanne with ditto tattoos on her birthday.