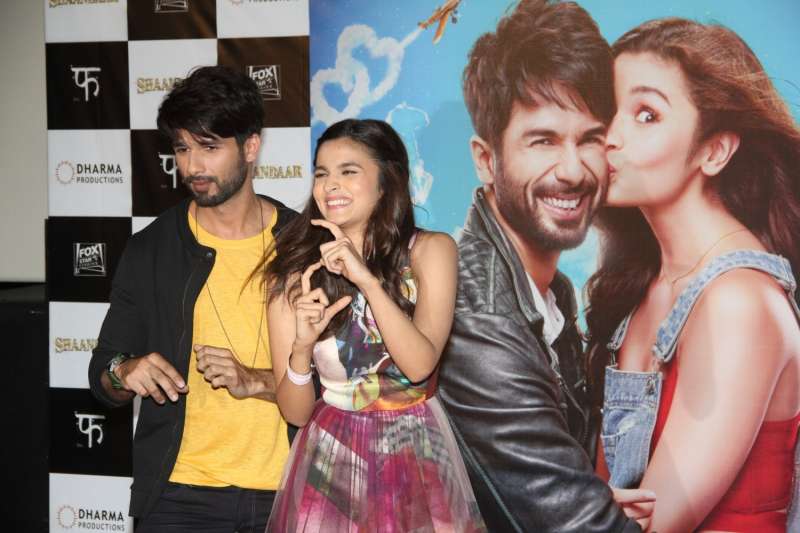 The over three-minute trailer introduces Shahid as Jagjinder Joginder and Alia as Alia, and their onscreen romance is palpable with funny and quirky scenes.

Shahid looks dapper with a beard, while Alia is seen sporting a casual look — with one moment in the trailer featuring the “Highway” actress in a ravishing pink bikini — which has turned out to be eye-catching for the Twitterati.

The movie is set around a destination wedding, and how love blossoms between Alia and Shahid’s character.

His romance with Alia apart, Shahid’s chemistry with his real life father Pankaj Kapur on reel also seems like it will be a treat to watch out for.

It’s an achievement for Alia Bhatt to be compared to Kareena Kapoor Khan, says actor Shahid Kapoor. At the trailer launch of their upcoming romantic comedy “Shaandaar”, Shahid was asked about the similarities between the two women, since he has worked with both of them.

“First of all, it’s a big compliment for Alia that she’s compared with Kareena, since she’s an extremely established actress and has done some notable work. I don’t see any similarity between the two, since I feel Alia is an original actress and so is Kareena,” Shahid said.

“I did ‘Jab We Met’ with Kareena many years ago, and now I’m doing ‘Shaandaar’ with Alia. The only common aspect is that I’m doing a love story. But other than that, I think both are phenomenal actors. Both of them are fantastic in their own ways,” he said.

Shahid also spoke about how Alia agreed to do another of their film “Udta Punjab” in just two days despite the film’s dark subject.

Kareena is also part of the project directed by Abhishek Chaubey.