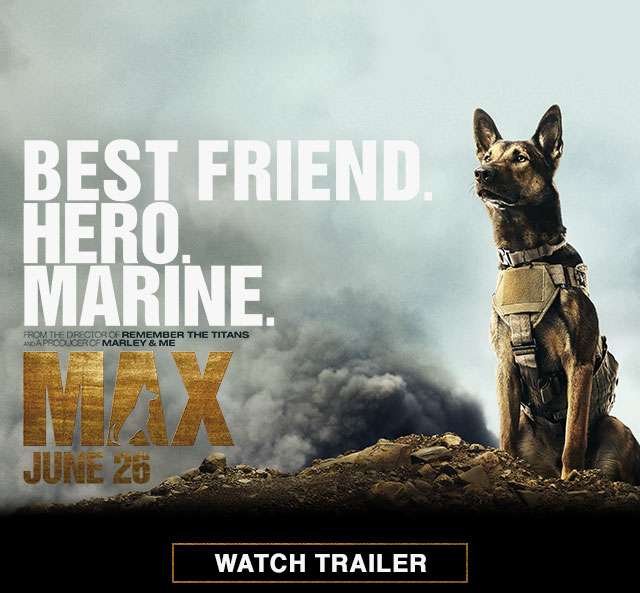 Max is dedicated to the memory of war dogs and their handlers. The narration starts off by telling us, “Dogs have been used in war since World War I” and nearly 3,000 dogs have been deployed in Iraq and Afghanistan. This film is the story of one such dog named, Max.

The film transports us to Afghanistan, where we are introduced to Max, a Belgian Malinois, and his handler, Marine Kyle Wincott (Robbie Amell). While Max leads the platoon that inspects the area and sniffs out the illegally stocked ammunition, the bond between him and his handler is palpable. But in a tragic turn of events, Kyle gets killed.

Max suffers from post-traumatic stress disorders and is transported back to Texas along with Kyle’s coffin. How he bonds with Justin (Josh Wiggins), Kyle’s younger brother and the Wincott family, forms the crux of the film.

The plot, co-written by Sheldon Lettich, is not out of the ordinary. But what makes the film believable is Justin’s and his dad Ray’s (Thomas Haden Church) character arcs. How they start off at tangents and then intersect interestingly, is a gradual pay off.

Though very formulaic, the sequences are as conventional and melodramatic. Right from Max bonding with Justin to him being used as an excuse to date the spirited Carmen (Mia Xitlali), cousin of his buddy Chuy (Dejon LaQuake), to helping the trio rescue Justin’s dad Ray from the clutches of the drug cartel.

But what keeps you gripped is the performance, especially that of Max. With his mournful eyes, he conveys a sense of loss and depression during poignant moments, especially during Kyle’s funeral and with his snarls and growls, he displays his abhorrence. You empathise with him during his traumatic bouts and especially when he is locked in the cage, during the July 4 celebrations.

Josh Wiggins as Justin gives an equally heart-warming performance. How he changes from an obstinate, video-games fixated teen to a responsible guy is natural. He displays the undercurrents of tension between him and his father and his frustration over repairing his cycle with uneasy apprehension, with ease and aplomb.

Thomas Haden Church as Ray has his onscreen moments to shine. Apart from playing the no-nonsense father, he displays an emotional connect with his son when he tells him, “The hero always tells the truth no matter what people think or what the consequences are.”

Lauren Graham as Pamela, Justin’s mother, too exhibits her sparks of brilliance especially when she hugs her son in the kitchen. And at another time when she threatens the police inspector who comes in search of Max after he escapes from the pound.

Robbie Amell charms you as a heroic Marine who gave up his life for his dog. Dejon LaQuake plays the perfectly brazen buddy Chuy and he is aptly supported by Mia Xitlali as his tough and sensible cousin Carmen.

On the technical front, kudos to the animal co-ordinator Mark Forbes for handling the canines so effectively. Apart from ensuring that Max delivers what he was supposed to do, there were other breeds of dogs like Rottweilers and Chihuahuas too, who add a special flavour to the film.

And capturing these animals in action is a feat by itself, which is brilliantly done by cinematographer Stefan Czapsky.

A must-watch film for canine lovers and those interested in emotional dramas.