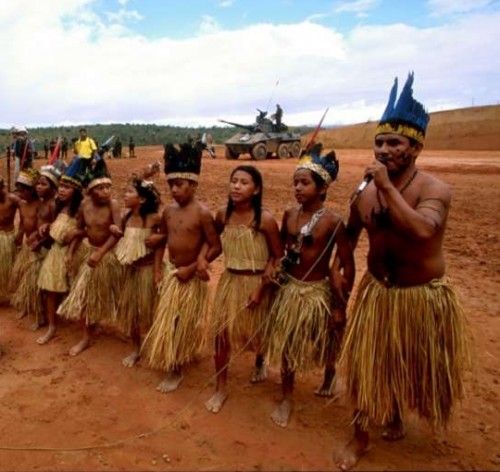 I do not live in Guyana anymore. Whatever happens in Guyana is irrelevant to the life I am currently leading. Yet, my heart fears for the people of Guyana and the choices they are faced with. Especially the people of Indian descent who are more vulnerable to being mislead. I was brought up in a village and I understand the village psyche and sentiments. Those who have a chance, they leave Guyana. Those without such a chance have to live with the choices they feel compelled to make. Because of u, and group dynamics influenced by the concept of a win for one race is the loss of another, Indo Guyanese generally vote emotionally. It is not an issue of core economics but rather an issue of security – ethnic economic security. And this has not been an issue that the PPP wants to solve, as it is this very issue that it exploits to assure itself of a win at General Elections. How this continuing ethnic economic security question impacts these elections will become clearer in the next few days.
These are very interesting times for Guyana. Guyana is again at crossroads very reminiscent of 1991/2 when change was being clamored for and which was very much expectant. The 1992 euphoria of free and fair elections and a change of government dwindled away into nothingness and now those once very euphoric sentiments have turned to disgust and outrage in varying shades against the PPP which once offered itself as a lean, clean and mean alternative. After 23 years in office, the PPP government scorecard boasts of a series of failures and nothing upon which to offer itself up for re-election.  From where I stand, the most damning of its failures has been its inability to diversify the liberalised economy it inherited from the PNC away from its dependence on primary commodities. The telecommunications and e-network sector which offered itself up with much hope and scope to catapult Guyana into modernity remains backward and unexploited. Among its harder to miss failures have been its inability to end blackouts, to produce an educated workforce or to transform the health sector into one which its own officers can seek medical care at. Repaving and reshaping roads are necessary but insufficient to transform an economy.

The PPP has had no record of accomplishments to put to the electorate. It can no longer speak of the PNC 28 years and hold its head up high. It has had 23 years of nothingness to match. Pound for pound, the PPP of Jagdeo/Ramoutar is no less than the PNC of Burnham. Burnham’s PNC was corrupt, so has been the Jagdeo/Ramotar’s PPP. There was fear of kick down the door banditry under the PNC; this has not dissipated under the PPP and now there is the fear of the lawless society, the stray bullet, the rising drug trade and headless bodies. Burnham toyed with Import Substitution Industrialisation in a period when this was fashionable and this led to the ban on imports, the repercussions of which are not under discussion right now. The PPP has done the reverse. It has flooded the country with imports without a substantial export sector to counter it. At least in Burnham’s ideology, he was bolstering manufacturing. The PPP gives not a hoot about local manufacturers from a policy perspective.

Then, there was Hoyte’s PNC. Hoyte’s PNC brought in the largest investors into Guyana. Omai, Barama, ATN, Reynolds, and it returned Booker Tate to manage Guysuco. This resulted in hundreds of jobs. The PPP matched those efforts by wasting several years criticizing these investments but failed to produce a substantial investment of its own. The strategically placed PPP supporters on the boards of these companies were seduced to a life of richness. Instead of using its shares on GT&T to force changes in the way the company operated and to end its monopoly, those shares were sold and its funds used in an unauthorized manner. Additionally, Booker Tate was dismissed and the PPP sat over colossal failures in the sugar industry. The sad reality is that the change in government in 1992, while welcomed from a democratic standpoint, has effectively halted Guyana’s stride forward as a newly liberalized economy. The PPP in 23 budgets failed to demonstrate the vision to make Guyana an economy that can stand on its own without being propped up by concessional funding. Yes, it has spent billions of taxpayers’ dollars on public sector investment projects but PSIP and public spending cannot sustain an economy without a viable manufacturing or service sector. And the PSIP and public spending have been the source of massive corruption in Guyana and have entrenched nepotism in their wake.

The PPP’s vision has been a life of mundane mediocrity in office while its officers amass personal wealth and style at taxpayers’ expense. The behavior of senior government officers have been of bullies at best; encapsulated in a monarchical bubble that guarantees the right to office as a matter of birth. The government officers themselves have no respect for the laws of the country, its women, or society. And their behavior continue unchecked because they feel assured they have the Indo-Guyanese vote. That bubble needs to burst and I do hope it does. The PPP needs to reexamine who it is and what it stands for.

Whatever the outcome of today’s elections, I would like to leave a few questions for Guyanese to ponder upon.

1. When your children get sick, where do you take them for treatment? Now ask yourself, where do the ministers and their children go for medical treatment? Who is paying for this service?
2.  Which schools do your children attend? Can you afford to send them to university?  Where do the Ministers’ children go to school? Which universities do they attend? Who really pay their fees?
3. How easy is it for you to make ends meet on your income? What make and model of car do you drive? How often can you fly overseas for a vacation? Now, look at the lifestyles of the ministers and their friends and ask yourself, is this why you pay taxes?
4. Then when your child graduates from university (if he or she does), what are the chances of him/her getting one of those US$ salaried jobs that are floating around in the government? Now, look at your salary and then look at the salaries of those government officer’s and their children which run into hundreds of thousands of dollars and ask yourself, how much better off are you really with the government of your choice?
5. A final question. Why do you pay taxes? To keep yourself in poverty and to have a handful of sweet talking politicians telling you about ancient dark days so you can continue to bankroll their lifestyles? Or are you willing to take a risk that maybe it is not about the colour of your skin anymore but the conditions of your life?

Only in a prosperous economy with an educated workforce can the ethnic economic security question be put to rest. The only way out of poverty is an opportunity at hard work and the willingness to get there. Drumming the race card, and pointing to where the guns came from for a particular shooting, is not the solution – they are part of the unsolved problem that the PPP has become entrenched in and did nothing about. Why should anyone vote for government who has failed to demonstrate the ability to keep you safe and are unable to do anything about the harm heaped on society even after the fact? Why vote for a government who believes you owe them your vote because you look like them, yet they abuse your taxes, do nothing for your security or economic welfare, and for five years ignore your fundamental concerns but remember you when they need your vote to continue their luxurious lifestyles?

Guyanese need to make their democracy work. Vote for the changes you want to see. If promised changes do not materialize, go back to the polls. There is no such thing as entitlements. Change can only come about from hard work and determination. And violence is not the answer. If the PPP is put back into office, then the opposition supporters need to accept that this is what the majority of the people of Guyana wanted. The opposition will have to work over another five years to convince the group on the other side, that their security interests are not at risk if they vote against the color of their skin. It is in the opposition interest to end tribalised politics, not to have disenchanted supporters shooting its cause in the foot with violence.