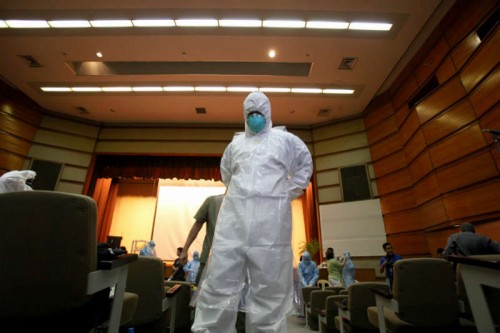 The World Health Organisation (WHO) announced that it will begin conducting Ebola vaccination trials in Guinea this week to test whether the vaccine is effective to prevent Ebola.

The phase III trial in one of the world’s most affected countries by Ebola will start on March 7 to test the VSV-EBOV vaccine for efficacy and effectiveness, based on data from initial clinical trials, Xinhua reported, citing WHO, on Thursday.

“The objectives of the trial are two-fold: to assess if the vaccine protects the contacts who were vaccinated and if vaccinating the contacts will create a buffer – or ring of protected individuals – around the index case to prevent further spread of the infection,” said UN spokesperson Stephane Dujarric in a daily briefing.

“If a vaccine is found effective, it will be the first preventive tool against Ebola in history,” said WHO Director-General Margaret Chan in Geneva.

According to the latest update on Ebola of WHO, 132 new confirmed cases had been reported in West Africa in the week leading up to March 1, an increase from the previous week of 99 new cases. And in Guinea, the weekly number of confirmed cases had also increased.

WHO said the vaccination will take place in areas of Basse Guinee, the region that currently has the highest number of cases in Guinea.

“The VSV-EBOV vaccine was selected for the planned trial based on a framework of parameters developed by the WHO Scientific and Technical Advisory Committee on Ebola Experimental interventions,” said WHO.

It added that the criteria included acceptable safety profile, induction of appropriate immune responses, including neutralizing antibodies, and the timely availability of sufficient supplies of vaccine doses.

The agency also said the vaccines’ manufacturers have assured that enough vaccine will be available in the coming months and that financial resources are in place to procure and make vaccines available in the affected countries.

The VSV-EBOV vaccine was developed by the Public Health Agency of Canada. The vaccine was licensed to NewLink Genetics, a company which is developing immunotherapies.

In last November, NewLink Genetics and Merck, a health care company, announced their collaboration on the vaccine.