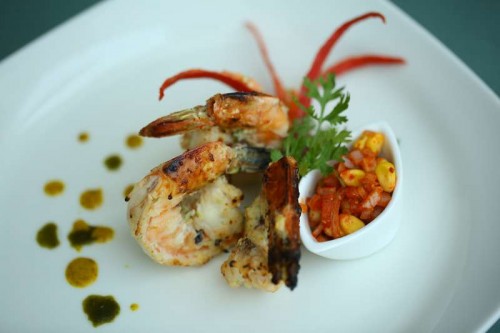 One of the unique aspects of Bengali cuisine, apart from the use of mustard oil, is that sugar is added to most of the dishes to balance the taste, a top chef from the five-star Taj Bengal said.

“While the use of mustard oil in Bengali cuisine is a well-known aspect, adding a pinch of sugar to most of the dishes is a largely unknown aspect,” Rajib Mohanta, senior chef de partie at Kolkata’s Taj Bengal, told IANS here.

Mohanta is at the Beyond Indus restaurant at the Taj Club House to offer guests a chance to taste the Bengali delicacies served in Taj Bengal’s Sonargaon. He is anchoring a 10-day food festival May 1-10 “Jomidari Bangla Ranna” – the jamindari food of Bengal that has been influenced by the British Raj, Islamic cuisine and the effects of partition.

He said mustard oil is used to get the authentic taste of Bengali cuisine. “Taste and tell whether you get the mustard oil taste/flavour in the dishes,” Mohanta threw a challenge, offering chilled aam porar shorbot (an aperitif of roasted mango pulp, flavoured with cumin, chat powder and black salt). The roasted raw mango pulp juice with cumin was certainly the most wanted drink of the moment as one sweats it out here during summer.

Of course, the drink certainly did not have any mustard oil flavour!

For many in southern India, Bengali dishes generally signify two things – the yummy sweets like rosogollas and the pungent-smelling dishes made in mustard oil. It is a different matter that gingelly/seasame oil used in southern India does also have a strong smell.

Be that as it may be, it was time for the taster’s portions of appetizers like beckti macher fry (deep fried crumbed river fish fillet), murgh chakori kebab (char grilled star anise flavoured chicken morsels) and lasooni jhinga (charcoal grilled fresh prawns marinated in curd and garlic).

There was also the divine kasundi dip to which one would gradually get addicted to.

It is said that one eats with the eyes first. And, as is usual, the fried fish pulled at the hand like a magnet.

“River fish or fresh water fish tastes better than sea water fish. The water makes the difference,” Mohanta said. While the exterior was crunchy the fish inside was very tender. One can try out the fish first with a very slight dash of kasundi and then dip into that in full. Chicken lovers can go for murgh chakori kebab.

The whitish lasooni jhinga is however the one appetizer that can even double up as the main course.

The subtle garlic flavour, coupled with the grilling on charcoal, was heavenly and compelling enough to opt for a second plate.

With the job of emptying the plates completed, it was time to restart the conversation till the main course arrived.

“I wanted to become a chef in a Taj hotel. Passing out of the hotel management institute in Bangalore, I joined the Taj group,” said Mohanta, who rose from the ranks.

“Hotels do have career change options for chefs. Chefs can become a suited and booted executive. Many chefs have exited the kitchens to enter their air-conditioned cabins. But this is not a common trend,” Mohamed Siddiq, executive chef at the Taj Club House said.

“Generally once a chef, always a chef is the rule in the profession,” Siddiq added.

Meanwhile, small portions of the main course and garlic tandoori roti arrived at the table.

One can relish the badi palak (fresh vegetables, baby spinach cooked in home style with radooni), a dry dish, or the narkel diye chholar dal (Bengal gram, tempered with cumin, ginger and coconut shavings) with garlic or missi roti. The dal, with crunchy coconut bits, gave out a nice taste.

Non-vegetarians should not miss out the chingri malai curry (fresh river prawns cooked in coconut cream), a Bengali specialty.

The sweet tooth can indulge in gurer payesh (rice cooked in milk finished with molasses `nolen gur’) or patisapta (fresh coconut cooked with jaggery, filled and rolled in a rice flour pancake).