Sachin and Shikha Sharma were told by their friends not to travel during the monsoon. But the couple, who got married last August, wanted to again visit their honeymoon destination Goa – this time during the monsoon to enjoy the rain writes Kavitha Bajeli Datt in Asian Lite. 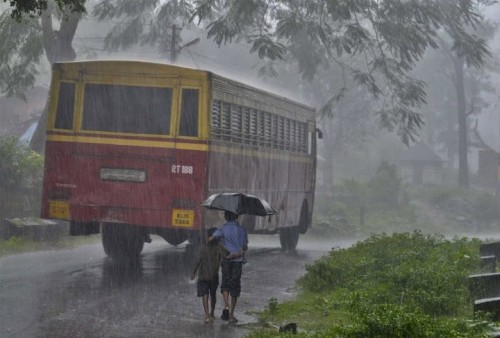 They were happy with the travel package, but what thrilled them more was that they were able to prove the naysayers wrong.

“It was heavenly. This was the first time that we travelled during monsoon and let me tell you it was something,” Shikha, who works in a BPO, said.

“It (Goa) wasn’t crowded as we see during peak season (from November to February) and that added to its charm. The cool breeze, the heavenly scent of the earth during rains, the food ..everything added to sizzle our romance. I wish I could have prolonged my stay.

“My husband was happy too as the trip fitted our budget,” she said.

The Sharmas are not the only ones. More and more Indians are now venturing out during the monsoon. They are mostly the adventurous kind or couples who want to avoid the crowds and enjoy and experience the rain.

D.S. Rawat, secretary general of The Associated Chambers of Commerce and Industry of India (ASSOCHAM), told IANS that monsoon tourism (from June to October) is a new concept, but “is fast emerging as a potential season for hospitality industry”.

Ranjeet Oak, Chief Business Officer-Holidays, MakeMyTrip, India’s leading online travel company that was founded in 2000 and pioneered the entire online travel industry in the country, said the monsoon is the best time for those looking for nature-oriented experiences.

“It was not considered a popular travel season in India, but the sentiment is fast-changing in the last couple of years, with monsoon travel picking up significantly,” Oak said.

He said the huge drivers for this are the fantastic deals offered by higher-star hotels, especially resorts and five-star properties, to boost occupancy in this otherwise lean travel period.

According to tour and travel experts, Kerala and Goa are the top travel destinations during the monsoon.

These are followed by Coorg in Karnataka; Udaipur and Mount Abu in Rajasthan; Lonavala, Mahabaleshwar and Matheran in Maharashtra; Darjeeling in West Bengal, Shillong and Cherrapunjee in Meghalaya; Mussorie, Nanital, Rishikesh and Kasauli in Uttarakhand; Leh in Ladakh and Port Blair in the Andaman and Nicobar Islands.

If you want to try out some unbeaten tracks during this season then, according to Hari Nair, founder and CEO of HolidayIQ.com, try out Dhanaulti and Munsiayari (both in Uttarakhand), Bharatpur (Rajasthan), Kakkabe (Karnataka), Netarhat (Jharkahnd) and Panhala (Maharashtra).

HolidayIQ.com is India’s first travel community with over two million members from 80+ Indian cities and the first holiday planning website.

Sharat Dhall, President, Yatra.com, India’s leading online travel company, said this season they are looking at growing about 57 percent as compared to the last two seasons.

According to him, quick weekend getaways for couples, DINKs or groups of friends are the flavour of the season.

“If we look at emerging trends, the spending has certainly gone up and I also feel that people are taking holidays more frequently than before,” Dhall said.

He could be right about that.

After their “beautiful” vacation, Sachin and Shikha are already planning their next “weekend” trip at the end of this month.

“I think this was the first time I didn’t mind the rain. It was fun getting wet. I had hired a scooty and explored Goa like I had not done in my previous trips. The ride through the lush, greenery soothed me. It was just beautiful,” Sachin said.

“My wife and I had a fantastic time. I don’t know why people say ‘don’t travel during this time’. It is comparatively cheaper too. I think monsoon travel should be tried by everyone.

“I am now planning a short trip this month, most probably to the Valley of Flowers (in Uttarakhand). I have heard this is the time to visit it. I am already looking forward to it,” Sachin added.