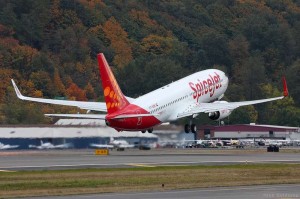 Days after the aviation regulator allowed it to open fresh bookings, cash-strapped budget passenger carrier SpiceJet  launched its discount scheme starting at Rs.1,499 for one way advance booking on all direct flights.

The scheme is valid on all direct flights on SpiceJet’s domestic network.

The airline said that such offers are an integral part of the LCC (low cost carrier) pricing model. The offers are meant to sell in advance at attractive prices seats that would otherwise be expected to go empty, thereby improving revenues.

“Unlike a bar of soap that can be put back on the shelf and sold later, an airline seat is the ultimate perishable commodity. Once the aircraft takes off, that empty seat’s revenue is lost forever,” said Sanjiv Kapoor, chief operating officer, SpiceJet.

The airline is in the middle of a re-structuring programme after going through financial turbulence in recent times.