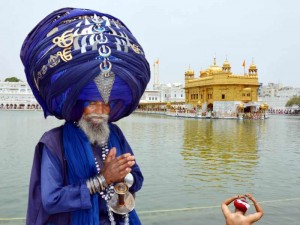 Although more than half a million Sikhs live in the US, a majority of Americans are unaware of what Sikhism is and some admit wariness when seeing their Sikh neighbours, according to new study.

Conducted by Washington-based Hart Research Associates, the study released here Tuesday, shows that there is enormous potential to increase awareness and enhance positive sentiments toward Sikhism within the broader American public.

In particular, greater understanding can be achieved by sharing information that emphasizes Sikhism’s belief in equality regardless of gender, race, or religion, highlighting the strong parallels between Sikh values and American values, and explaining the significance of the turban, it said.

The report, “Sikhism in the US: What Americans know and need to know,” was commissioned by the National Sikh Campaign (NSC) to analyse Americans’ current view of Sikhism and identify key messages to increase their acceptance of Sikh Americans.

The study was developed to provide Sikhs a foundation for awareness-based initiatives that dispel the misperceptions that have driven the dramatic rise of hate-based violence against Sikhs since 9/11.

“This landmark study will help the Sikh community by giving us the ability to educate Americans in a way that is both relatable and effective,” said Gurwin Singh Ahuja, Co-Founder of NSC.

“We want to make sure that we pave a way for a conducive environment for our future generations so they don’t have to take off their turban to hide or to feel sorry for their identity,” said Rajwant Singh, a co-founder of the NSC.

Researchers found that when survey respondents were given information about Sikh history and beliefs, their impressions grew from “neutral” to “warm.”

Groups with the most significant change in views included Republicans, Hispanics and Americans ages 65 and older.

“When people learn this information, it creates a fundamental change in the way they think about Sikhs and it’s transformative,” said Geoff Garin, president of Hart Research Associates.

Conducted in August and September 2014, the study included information from three focus groups consisting of white Americans with mixed levels of education.

It also covered a nationwide survey of 1,144 non-Asian Americans conducted in August and September 2014.

. The majority of Americans (60 percent) admit to knowing nothing at all about Sikh Americans and knowledge of Sikhism is substantially lower than for other minority religious groups in the US.

. With unawareness levels so high, many Americans make false assumptions when they see a Sikh.

. While this lack of knowledge is a challenge, it also represents an enormous opportunity. Without much knowledge to form attitudes, most Americans rate their feelings toward Sikh Americans as generally neutral or non-existent.

. Sikhs must tell their American story in familiar and positive terms, highlighting the value of equality.

. For Millennials and other receptive audiences, explaining the significance of the turban is highly welcomed.

The turban is most commonly associated with Sikh Americans, however it is also what makes many Americans uneasy around Sikhs.