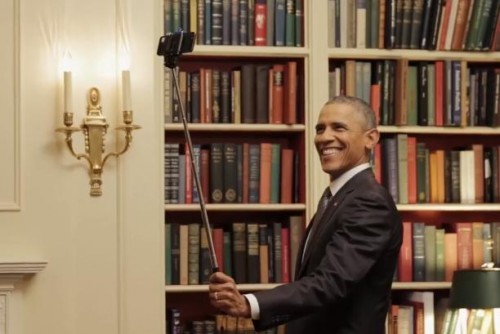 A new video of US President Barack Obama, in which he uses a selfie stick to sell his ambitious health insurance plan, has gone viral – generating over 15 million views in just eight hours of its release late Thursday.

The two-minute video by the Los Angeles-based BuzzFeed Motion Pictures Group is made with a purpose: to get young Americans sign up for the healthcare coverage – famously known as Obamacare – whose deadline is Feb 15, Adweek reported.

The video titled “Things Everybody Does But Doesn’t Talk About” begins with Obama standing outside the Oval Office, trying out various looks in a gilded but dirty mirror.

In the video, Obama is waiting for an interviewer to arrive. Bored, he begins to do goofy things.

He sticks out his tongue and gurns before wearing a pair of dark sunglasses. Then, Obama tests out a selfie stick and mimes playing basketball.

He sketches a picture of his wife Michelle in a notebook with little hearts above her name.

Later, he tries and fails to get an oversize-cookie into a glass of milk. “Thanks, Obama”, he murmurs to himself when the cookie will not fit, the report added.

Obama has also experimented with the presidential image in the past.

He was the first sitting US president to appear on a late-night comedy show and the first to participate in online hangouts.

In January this year, Obama was interviewed at the White House by three young YouTube stars after he delivered his State of the Union address.