A US terrorism task force involving federal and local agencies is investigating a shooting rampage at two military centres in Chattanooga, Tennessee in which four Marines were killed and the suspect shot dead….reports Asian Lite.com 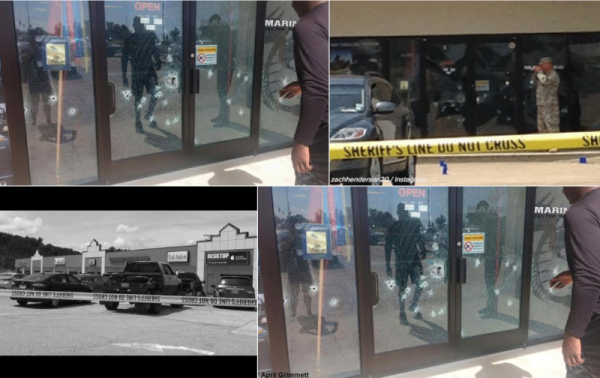 President Barack Obama, who was briefed about the shootings by the FBI director, saying “We take all shootings very seriously” vowed that the investigation would be “thorough and prompt”.

“Obviously when you have an attack on a US military facility, then we have to make sure that we have all the information necessary to make an assessment in terms of how this attack took place and what further precautions we can take in the future,” he said.

Homeland Security Secretary Jeh Johnson said authorities were stepping up security at “certain federal facilities, out of an abundance of caution” after the shootings.

Then the gunman, who according to a law enforcement official cited by CNN, was driving in a rented silver Ford Mustang convertible, moved on to his next target more than seven miles away: a Naval reserve centre.

There, he rammed into a gate at some point during his shooting rampage and was eventually killed by police.

“We will treat this as a terrorism investigation until it can be determined that it is not,” he said.

US Attorney Bill Killian earlier told reporters that authorities were treating the shooting as an “act of domestic terrorism.”

Abdulazeez was not in any US databases of suspected terrorists, CNN reported citing a US official.

He was born in Kuwait and had Jordanian citizenship, two law enforcement officials said.

He was a naturalized US citizen, one official said. And he may have travelled back to the Middle East in recent years.

Abdulazeez graduated from the University of Tennessee at Chattanooga in 2012 with a degree in electrical engineering, a university spokesman said.