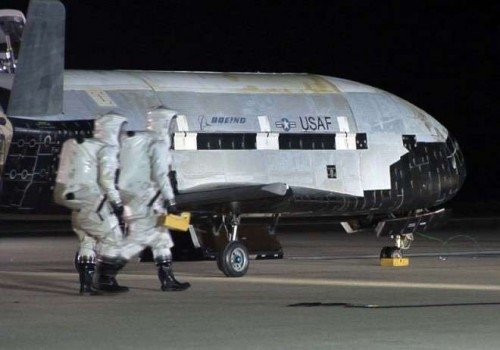 he US Air Force’s mysterious X-37B space plane was launched  for its fourth secret space mission.

The reusable, unmanned X-37B Orbital Test Vehicle lifted off atop an Atlas V rocket at 11:05 a.m. from Cape Canaveral, Florida.

The US Air Force did not say how long the X-37B will remain in orbit, but each of the three missions it has flown lasted longer than the previous one. Its third mission ended last October after a total time of 674 days in orbit.

The X-37B, built by Boeing, looks much like NASA’s retired space shuttles, only much smaller. It is boosted into orbit by a rocket and lands like an aircraft on a conventional runway.

The exact purpose of the X-37B was never revealed and the secrecy surrounding the project has led to speculation that the solar-powered X-37B can be used as a spy satellite or to deliver weapons from space.

This time, the US Air Force was only willing to say that an experimental Hall thruster, a type of electric propulsion device that produces thrust by ionising and accelerating a noble gas, usually xenon, was onboard the X-37B.

“This results in increased payload carrying capacity and a greater number of on-orbit maneuvers for a spacecraft using Hall thrusters rather than traditional rocket engines.”

Earlier this month, US space agency NASA revealed that the X- 37B will also carry about 100 different materials samples to test how they hold up in space.

The X-37 programme began as a NASA project in 1999 but was later transferred to the Pentagon. Currently, it’s being run by the US Air Force’s Rapid Capabilities Office.

“We are excited about our fourth X-37B mission,” US media quoted Randy Walden, director of the Rapid Capabilities Office, as saying. “With the demonstrated success of the first three missions, we’re able to shift our focus from initial checkouts of the vehicle to testing of experimental payloads.”