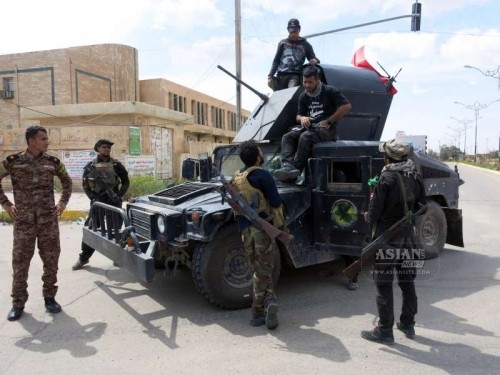 The troops backed by brigades of Shia and Sunni militias, known as Hashd Shaabi (Popular Mobilisation), managed to free the town of Huseibah al-Sharqiyah, east of Ramadi, after fierce clashes with the IS militants who seized the town late on Thursday, the source told Xinhua news agency.

The troops and allied militias started their advance earlier in the day toward the town from their bases in Habbaniyah airbase and the nearby town of Khaldiyah, some 80 km west of Iraq’s capital Baghdad, the source said.

“The troops have freed the police station as well as surrounding buildings and houses after they drove out the extremist militants,” the source said.

Huseibah al-Sharqiyah is a town with a cluster of houses and a few government buildings located on the main road between the town of Khaldiyah and Ramadi.

The operation to liberate the town is part of a major counter-offensive designed to free Ramadi, some 110 km west of Baghdad, which fell in the hands of the IS after deadly battles last week.

After the fall of Ramadi late on Sunday, thousands of security forces and allied Shia militias backed by columns of armoured vehicles and tanks moved from Baghdad and other Iraqi provinces to converge at Habbaniyah military base.

The rapid retreat of the security forces and allied Sunni militias from Ramadi pushed Iraqi Prime Minister Haider al-Abadi, also the commander-in-chief of Iraqi armed forces, to order the mainly Shia militias of Hashd Shaabi to prepare to participate in battles against the IS in Anbar, ignoring US concerns that the presence of Shia militias could spark sectarian strife.

The IS terrorist group has seized most of Anbar province and tried to advance toward Baghdad during the past few months, but several counter attacks by security forces and Shia militias have pushed them back.

The security situation in Iraq has drastically deteriorated since last June, when bloody clashes broke out between Iraqi security forces and IS militants.