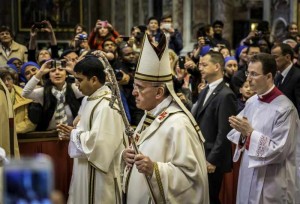 Marie Alphonsine Ghattas and Mariam Bawardy were among four new saints declared at a ceremony in Rome’s St. Peter’s Square that was attended by Palestinian President Mahmoud Abbas and over 2,000 Christians.

Marie Alphonsine Ghattas, who was born to a Palestinian family in Jerusalem, co-founded the Congregation of the Rosary Sisters, which today runs many kindergartens and schools, BBC said.

Mariam Bawardy was born in Galilee to Greek Catholic parents from Syria and Lebanon.

A mystic, she is said to have carried out many miracles and to have experienced stigmata, wounds representing those suffered by Jesus on the cross.

Both nuns were educators who lived through tough conditions, overcoming male dominance in Ottoman society, poverty and ill-health while helping others.

They are said to have seen apparitions of the Virgin Mary and remained in close communication with her, the report said.