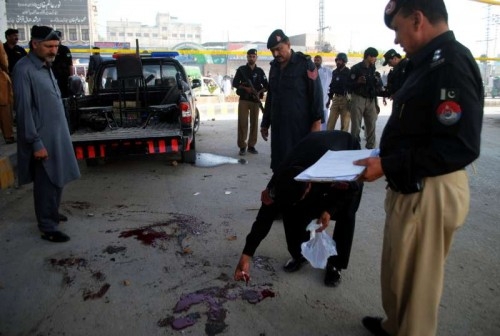 Pakistan has seen a rising tide of sectarian violence in recent times, particularly against Shias — of which the Ismaili community is a sub-sect — who make up around 20 percent of the country’s predominantly Muslim population.

In the past, there have been instances of anti-Ismaili violence in Chitral and Gilgit-Baltistan, mostly in the form of communal flare-ups.

In 2013, a bomb attack at Karachi’s Aisha Manzil killed four and injured 42 others. The outlawed Tehreek-i-Taliban Pakistan had claimed responsibility for the earlier attacks.

Wednesday’s incident in Karachi in which 43 people belonging to the Ismaili community were gunned down in a bus was the worst anti-Shia attack in the country since January 30, when a suicide bomber blew himself up in a mosque in the southern Shikarpur district, killing 61.

Anti-Shia attacks have been increasing in recent years in Karachi and also in Quetta, the northwestern area of Parachinar and the far northeastern town of Gilgit.

At least 1,000 Shias have been killed in the past two years in Pakistan, with many of the attacks being claimed by the hardline Sunni group, Lashkar-e-Jhangvi (LeJ), which views them as heretics.

Ismailis are known for their progressive Islamic views. Their spiritual leader Prince Karim Aga Khan is a globally renowned philanthropist and business magnate.

“The dead and injured have been shifted to a nearby hospital,” an official of the Ismaili National Council, a group that represents the community, said after Wednesday’s massacre.

The bus belonged to the Al-Azhar Garden Colony, an Ismaili community housing project in Karachi. It was on a regular run to Federal B Area of the port city of Karachi.