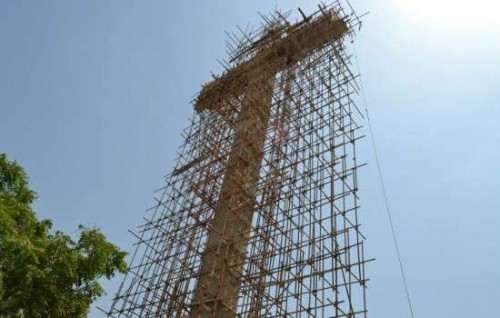 A 140-foot bullet-proof Cross is being built in Pakistan’s Karachi city, the biggest in Asia, a media report said.

Following a dream in which Gill claims to have seen God asking him to do something for the Christian community four years ago, he in due course decided to build Asia’s largest Cross in the 90 percent Muslim country.

The nature of the structure was kept a secret until it became evident. When it did, 20 Muslims quit construction in disapproval, but one stayed.

The Muslim worker, Mohammad Ali, says the Cross is a “work of God”. He is working 14 hours a day, seven days a week, mentioning Gill’s support of his family as a reason for his commitment, sources said.

The Christian community comprises about one million of Karachi’s population of 21 million.

Gill says the Cross will “be a symbol of God, and everybody who sees this will be worry-free”.

The Gora Qabristan is a Christian cemetery that is frequently the target of miscreants.

Inhabitants of an intruding settlement live in buildings covering old graves, and they often throw garbage, waste in the cemetary.