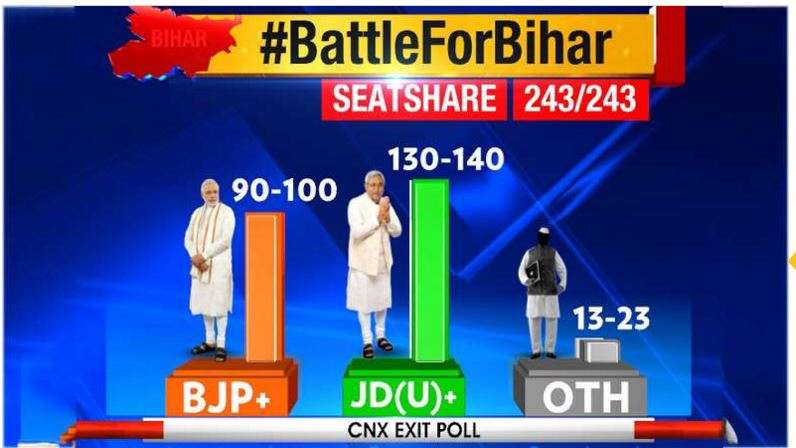 The bitterly fought Bihar assembly elections will see a close outcome, with exit polls at the end of staggered election on Thursday divided on the possible winner.

While Today’s Chanakya gave 155 of the 243 seats to the Bharatiya Janata Party (BJP) and its three allies, NewsX-CNX said Chief Minister Nitish Kumar’s Janata Dal-United (JD-U) and its two allies would get 135 seats.

Chanakya forecast 83 seats to the JD-U, the Rashtriya Janata Dal (RJD) of Lalu Prasad and the Congress who make up the Grand Alliance.

In contrast, NewsX said the BJP and its allies — the Lok Janshakti Party (LJP), the Hindustani Awam Morcha (HAM) and the Rashtriya Lok Samata Party (RLSP) — would win 95 seats.

Other exit polls predicted a close outcome from one of India’s most fiercely fought assembly elections in recent times.

Any party or combine would need 122 seats to secure a majority in the 243-member Bihar assembly. The vote count will take place on Sunday.

An India Today-Cicero exit poll predicted a hung assembly, with the BJP-led alliance winning 120 seats to 117 by the Grand Alliance.

A Dainik Jagran exit poll said the BJP-led National Democratic Alliance (NDA) would get a majority with 130 seats as compared to 97 for the Grand Alliance.

IBN-7 predicted “a full majority” for the Grand Alliance and 95 seats for the BJP combine.

The Times Now-CVoter survey gave 122 seats to the Grand Alliance and 111 to the NDA.

The ABP News gave the BJP and its allies 130 seats compared to 108 to the JD-U alliance.

Around 56 percent of the 66.8 million electorate voted in the five rounds of polling that began on October 12.