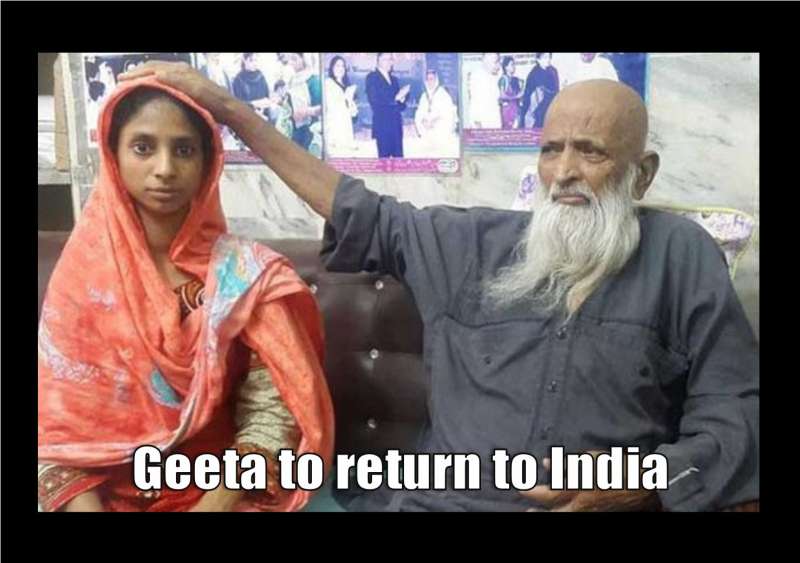 Geeta, a deaf-mute Indian woman who has been stranded in Pakistan for over a decade, will be back in India soon, the government announced on Thursday.

External Affairs Minister Sushma Swaraj tweeted: “Geeta will be back in India soon. We have located her family. She will be handed over to them only after the DNA test.#”

External affairs ministry spokesperson Vikas Swarup said at a briefing that the procedure for bringing Geeta back is almost over and she will be back in India very soon.

He also said that several families had approached the government claiming to be Geeta’s parents.

Sushma Swaraj has written to the chief ministers of the states from where the families belonged to conduct an internal probe on them to see if their versions on Geeta’s disappearance matched with what was known of her.

Geeta, now in her early 20s, was around 11 years old when she inadvertently crossed the border to Pakistan.

Swarup said that based on the investigations, three sets of photographs of probable families had been sent to Geeta, who stays at the Edhi Foundation in the port city of Karachi.

“Geeta identified one set of photo as possibly being those of her parents. But conclusive proof (of parentage) can be known through a DNA test,” he said.

He said that Geeta’s Indian nationality been verified and “bringing her back to India is not dependant on whether we locate her parents”.

He said Geeta after arriving in India can meet the family she has identified and once DNA tests are done, she will be handed over to the family.

In case, the DNA does not match, “we have identified two institutions – one in Delhi one in Indore meant for people with certain disabilities, and we believe Geeta will find a very good and welcoming home there,” he added.

In 2003, Geeta — then 11 years old — was spotted by the Pakistan Rangers in Lahore, after she strayed across the border. The girl was handed over to the Edhi Foundation, a social welfare organisation in Pakistan.

Bilquis Edhi, who runs the Edhi Foundation, has named her Geeta.

Geo TV of Pakistan, quoting sources, said that Geeta is expected to depart for India as early as October 26. Geo also said that Bilquis Edhi would be travelling along with Geeta on her journey back to her homeland.