Prime Minister Narendra Modi will be on an eight-day visit to the five Central Asian countries and to Ufa in Russia for the BRICS and SCO back-to-back summits from July 6-13 that will see a packed schedule with the prime minister spending barely 24 hours in each country….reports Asian Lite News. 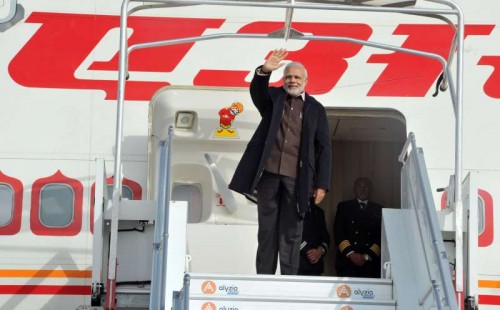 Modi will visit Uzbekistan and Kazakhstan from July 6-8, after which he will attend the summits of the BRICS – Brazil, Russia, India, China and South Africa – and the Shanghai Cooperation Organisation (SCO) in the Russian city of Ufa from July 8-10.

He will then visit Turkmenistan, Kyrgyzstan and Tajikistan from July 10-13, officials announced here on Friday.

In Ufa, in the Republic of Bashkortostan, over 1,300 km from Moscow, Modi would be meeting his peers from the other nations of the BRICS grouping — Chinese President Xi Jinping, Brazilian President Dilma Rousseff, Russian President Vladimir Putin, who is the host, and South Africa’s Jacob Zuma – during the summit.

A meeting between Prime Minister Modi and his Pakistani counterpart Nawaz Sharif on the sidelines of the Shanghai Cooperation Organisation (SCO) meet is likely, but the officials declined to say anything.

Both leaders are to attend the SCO summit, during which both India and Pakistan are likely to be granted full membership of the China-backed grouping.

On July 9, there would be an official welcome, after which he would attend a meeting with the BRICS Business Council, comprising five business leaders from each member country.

The business council would present their annual report to the leaders, Mehta said.

The theme of the 7th BRICS summit is ‘BRICS partnership: A powerful factor for Global Development’.

The leaders would hold restricted as well as delegation level talks. The agenda would be political and economic but the emphasis would be on economic cooperation.

There would be a signing ceremony of the declaration followed by a media interaction.

As part of the BRICS outreach, Russia has invited the members of the SCO and the observer nations as well as members of the Eurasia Economic Union to the summit, she said.

In Uzbekistan, the highlight would be Modi’s interaction with Indologists and Hindi language students in Tashkent.

In Kazakhstan, Modi would address the Nazarbayev University and also inaugurate the India-Kazakhstan Centre for Excellence in ICT, where India has stationed a Param supercomputer, Sarna said.

In Almaty (Kazakhstan), Modi would also attend a business event, where leading CEOs from both countries would be present.

In Turkmenistan, the prime minister would inaugurate a centre for traditional medicine and yoga, with the participation of the Tukmen government, said Sarna.

In Kyrgyzstan, Modi will have a packed schedule that will include the inauguration of an e-health link, under which one hospital in Bishkek will be linked with a hospital in India.

“This is a pilot project and can be replicated,” the top official said.

In Tajikistan, the final leg of the tour, Modi will hold talks with President Emomali Rahmon, besides other engagements.

Asked if Modi would pay a visit to the Ayni air base in Tajikistan, where India has set up a field hospital, the secretary said the schedule had not been firmed up yet.

He said the visit to the five nations, which are part of India’s extended neighbourhood, are of strategic importance politically and economically.